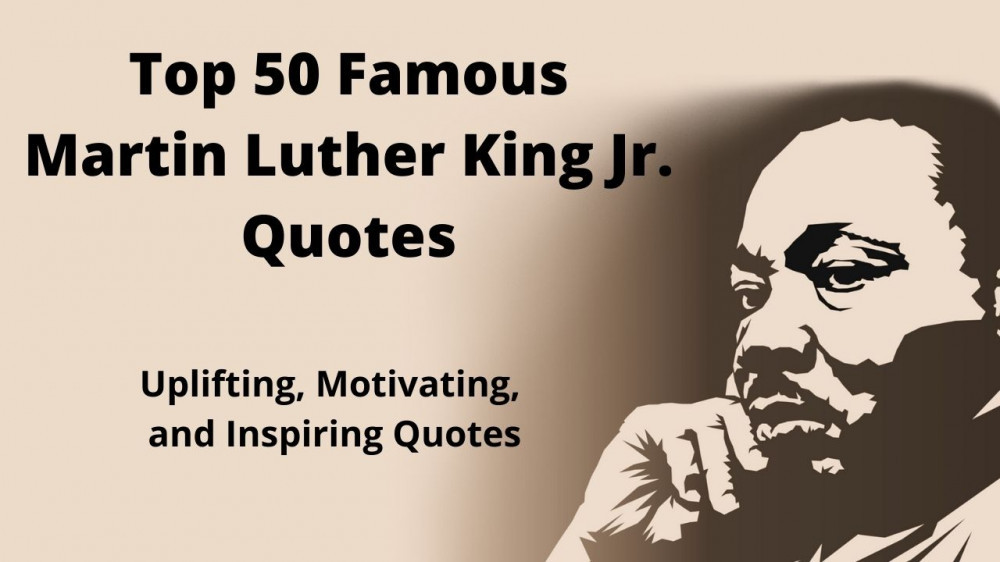 Martin Luther King Jr. (born Michael King Jr.; January 15, 1929 – April 4, 1968) was an American Baptist minister and activist who became the most visible spokesman and leader in the civil rights movement from 1955 until his assassination in 1968.

King experienced racism from an early age and these events remained and eventually led him to an activist life. After graduating from college with a doctorate in theology, King became a pastor in Alabama. He launched a series of peaceful protests in the south that eventually changed a number of laws addressing African American equality (the right to vote, desegregation, labor rights). King has given hundreds of moving speeches across the country, and in 1964 received the Nobel Peace Prize.

You can read more about his life and legacy on wikipedia

»Every man must decide whether he will walk in the light of creative altruism or in the darkness of destructive selfishness.«

»We are not makers of history. We are made by history.«

»We must use time creatively, in the knowledge that the time is always ripe to do right.«

»The function of education is to teach one to think intensively and to think critically. Intelligence plus character – that is the goal of true education.«

»We may have all come on different ships, but we’re in the same boat now.«

»All labor that uplifts humanity has dignity and importance and should be undertaken with painstaking excellence.«

»The quality, not the longevity, of one’s life is what is important.«

»I have decided to stick with love. Hate is too great a burden to bear.« 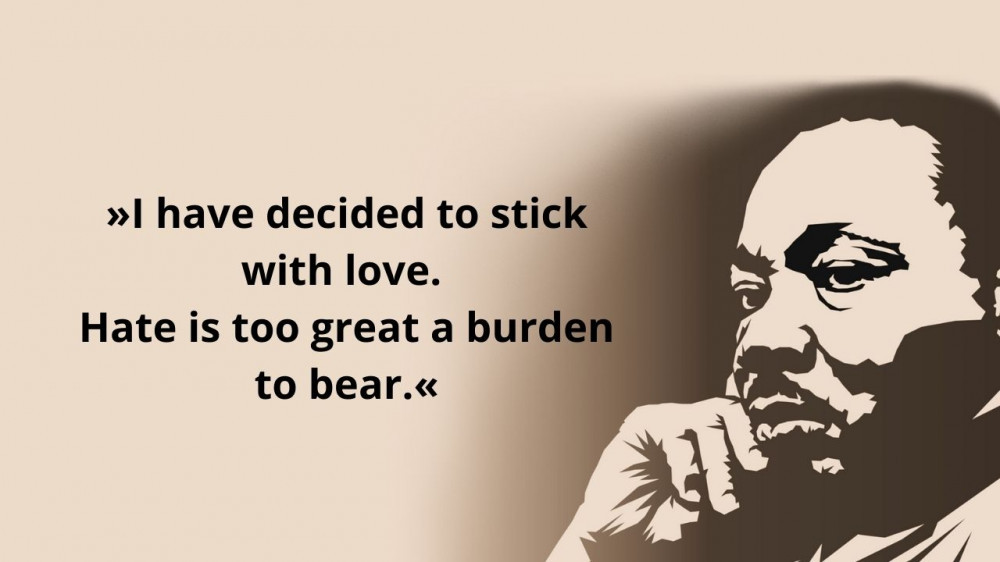 »Man must evolve for all human conflict a method which rejects revenge, aggression, and retaliation. The foundation of such a method is love.«

»It is not enough to say we must not wage war. It is necessary to love peace and sacrifice for it.«

»There comes a time when one must take a position that is neither safe nor politic nor popular, but he must take it because his conscience tells him it is right.«

»Those who are not looking for happiness are the most likely to find it because those who are searching forget that the surest way to be happy is to seek happiness for others.«

»We must accept finite disappointment, but never lose infinite hope.«

»Whatever your life’s work is, do it well. A man should do his job so well that the living, the dead, and the unborn could do it no better.«

»Everything that we see is a shadow cast by that which we do not see.«

»Our lives begin to end the day we become silent about things that matter.« 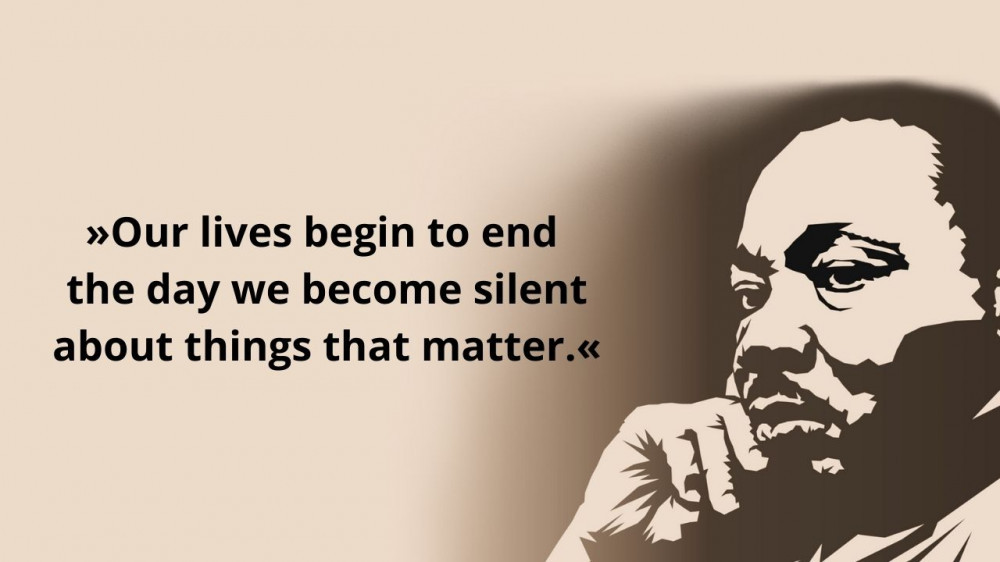 »Nothing in all the world is more dangerous than sincere ignorance and conscientious stupidity.«

»Ten thousand fools proclaim themselves into obscurity, while one wise man forgets himself into immortality.«

»If I cannot do great things, I can do small things in a great way.«

»Whatever affects one directly, affects all indirectly. I can never be what I ought to be until you are what you ought to be. This is the interrelated structure of reality.«

»I came to the conclusion that there is an existential moment in your life when you must decide to speak for yourself; nobody else can speak for you.«

»Almost always, the creative dedicated minority has made the world better.«

»The soft-minded man always fears change. He feels security in the status quo, and he has an almost morbid fear of the new. For him, the greatest pain is the pain of a new idea.«

»He who passively accepts evil is as much involved in it as he who helps to perpetrate it. He who accepts evil without protesting against it is really cooperating with it.« 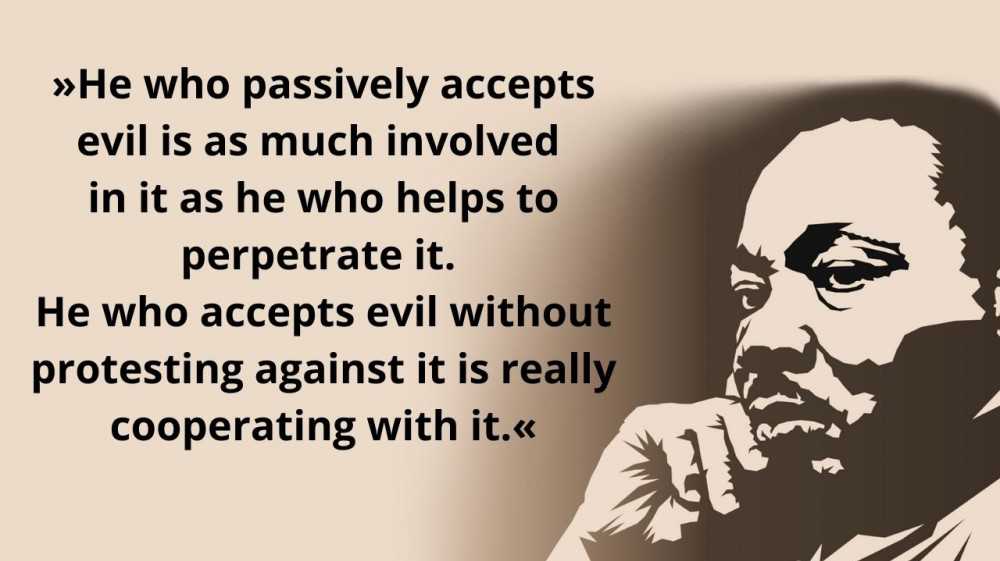 »Human progress is neither automatic nor inevitable… Every step toward the goal of justice requires sacrifice, suffering, and struggle; the tireless exertions and passionate concern of dedicated individuals.«

»The ultimate tragedy is not the oppression and cruelty by the bad people but the silence over that by the good people.«

»We will remember not the words of our enemies, but the silence of our friends.«

»Law and order exist for the purpose of establishing justice and when they fail in this purpose they become the dangerously structured dams that block the flow of social progress.«

»Our scientific power has outrun our spiritual power. We have guided missiles and misguided men.«

»We must come to see that the end we seek is a society at peace with itself, a society that can live with its conscience.«

»What is wrong in the world today is that the nations of the world are engaged in a bitter, colossal contest for supremacy.«

»The hope of a secure and livable world lies with disciplined nonconformists who are dedicated to justice, peace, and brotherhood.« 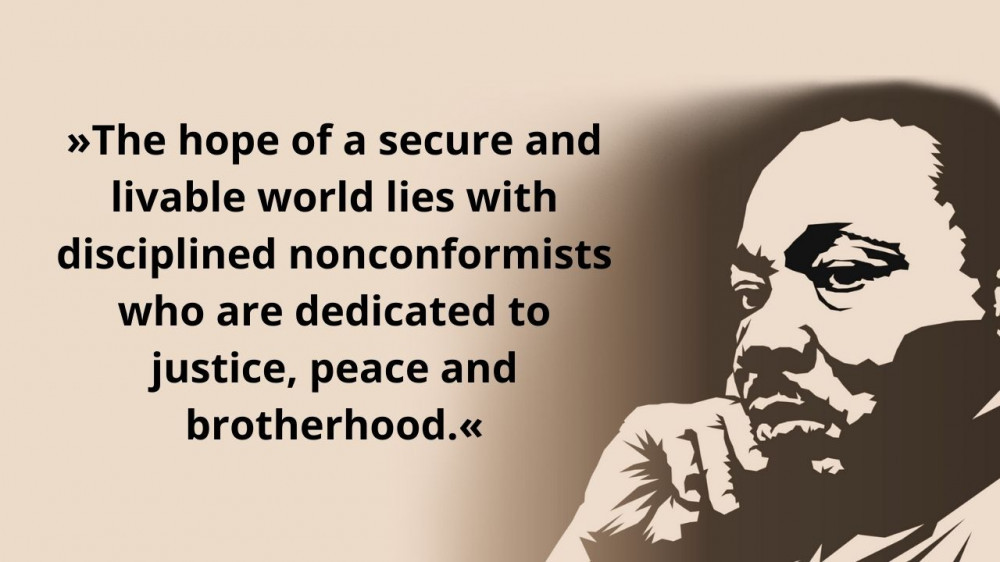 »We who in engage in nonviolent direct action are not the creators of tension. We merely bring to the surface the hidden tension that is already alive.«

»Nonviolence means avoiding not only external physical violence but also internal violence of spirit. You not only refuse to shoot a man, but you refuse to hate him.«

»I have a dream that one day every valley shall be exalted, every hill and mountain shall be made low, the rough places will be made straight and the glory of the Lord shall be revealed and all flesh shall see it together.«

»I have the audacity to believe that people everywhere can have three meals a day for their bodies, education, and culture for their minds, and dignity, equality, and freedom for their spirits.«

»If physical death is the price that I must pay to free my white brothers and sisters from a permanent death of the spirit, then nothing can be more redemptive.«

You can watch this month video on this link:

Healing by Kevin MacLeod is licensed under a Creative Commons Attribution 4.0 license. https://creativecommons.org/licenses/by/4.0/

Pixabay License: Free for commercial use. No attribution is required.

Thank you for reading my post Top 50 Famous Martin Luther King Jr. Quotes. I hope you enjoyed reading and thought about these quotes.

Do you have a favorite one or which one touched you the most in the selection of Martin Luther King Jr. quotes? I look forward to your reflections on these quotes that you share with me in the comments.