These positive quotes are for the week of April 12 – April 18, 2021, and are famous quotes about magic. I wished for a bit of magic and searched for quotes on the subject for this week. 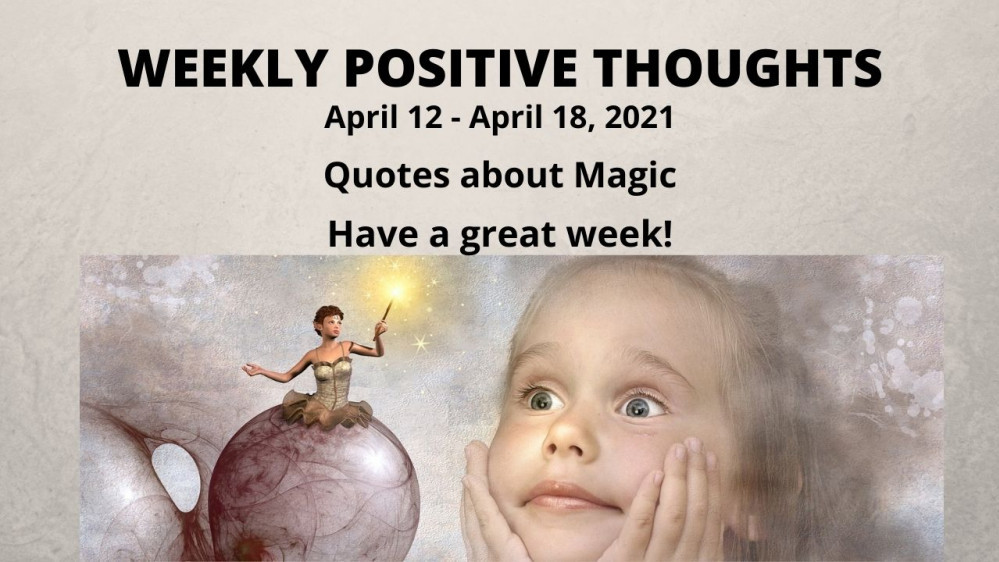 Monday, April 12, 2021
“The world is full of magic things, patiently waiting for our senses to grow sharper.”
W.B. Yeats
William Butler Yeats (13 June 1865 – 28 January 1939) was an Irish poet, dramatist, prose writer, and one of the foremost figures of 20th-century literature. A pillar of the Irish literary establishment, he helped to found the Abbey Theatre, and in his later years served two terms as a Senator of the Irish Free State. 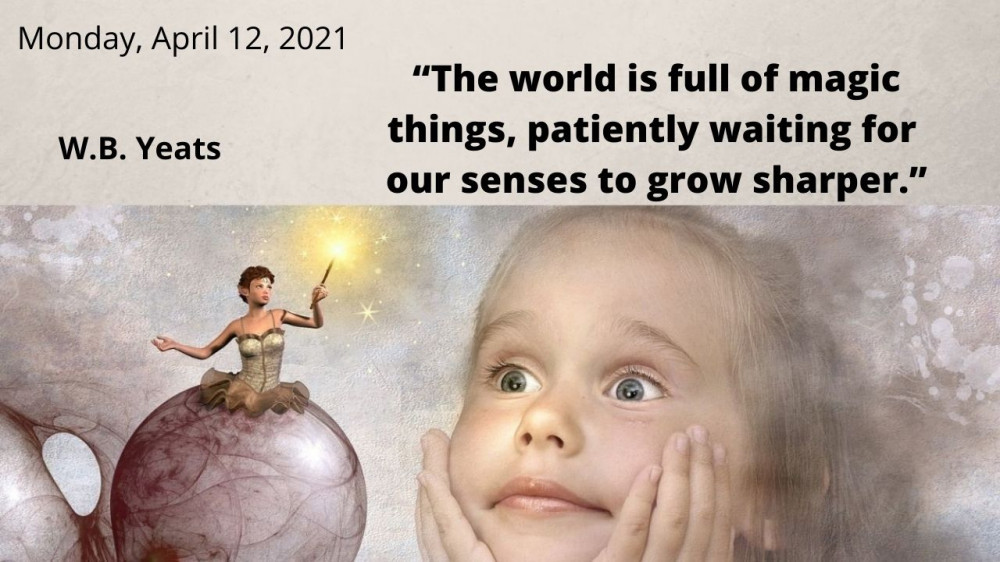 Tuesday, April 13, 2021
“Whatever you think you can do or believe you can do, begin it. Action has magic, grace and power in it.”
Johann Wolfgang von Goethe
Johann Wolfgang von Goethe (28 August 1749 – 22 March 1832) was a German poet, playwright, novelist, scientist, statesman, theatre director, critic, and amateur artist. His works include four novels; epic and lyric poetry; prose and verse dramas; memoirs; an autobiography; literary and aesthetic criticism; and treatises on botany, anatomy, and color. He is considered to be the greatest German literary figure of the modern era. 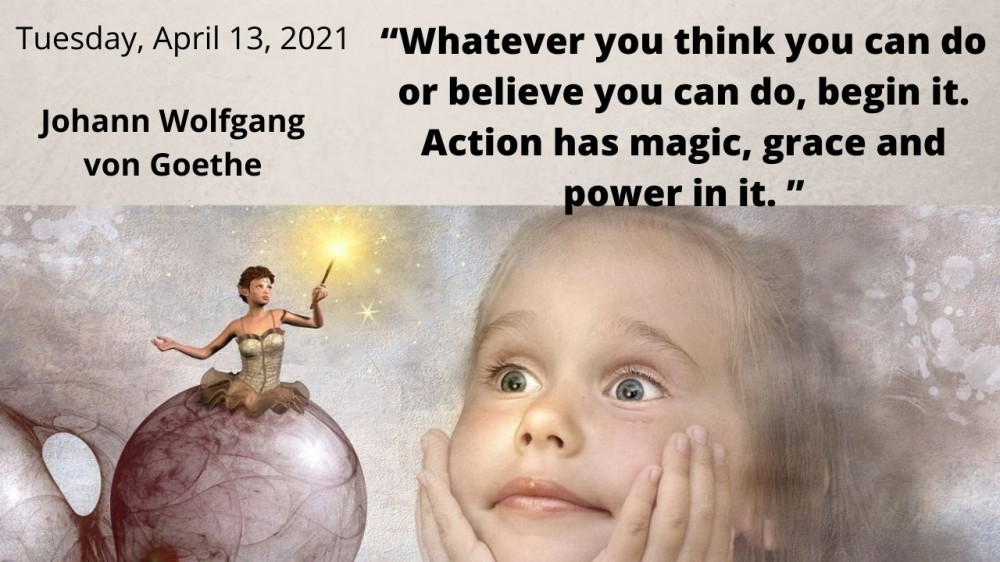 Wednesday, April 14, 2021
“Magic comes from what is inside you. It is a part of you. You can’t weave together a spell that you don’t believe in.”
Jim Butcher
Jim Butcher (born October 26, 1971) is an American author. He has written the contemporary fantasy The Dresden Files, Codex Alera, and Cinder Spires book series. While he was sick as a child, Butcher’s sisters introduced him to The Lord of the Rings and The Han Solo Adventures novels to pass the time, thus beginning his fascination with fantasy and science fiction. 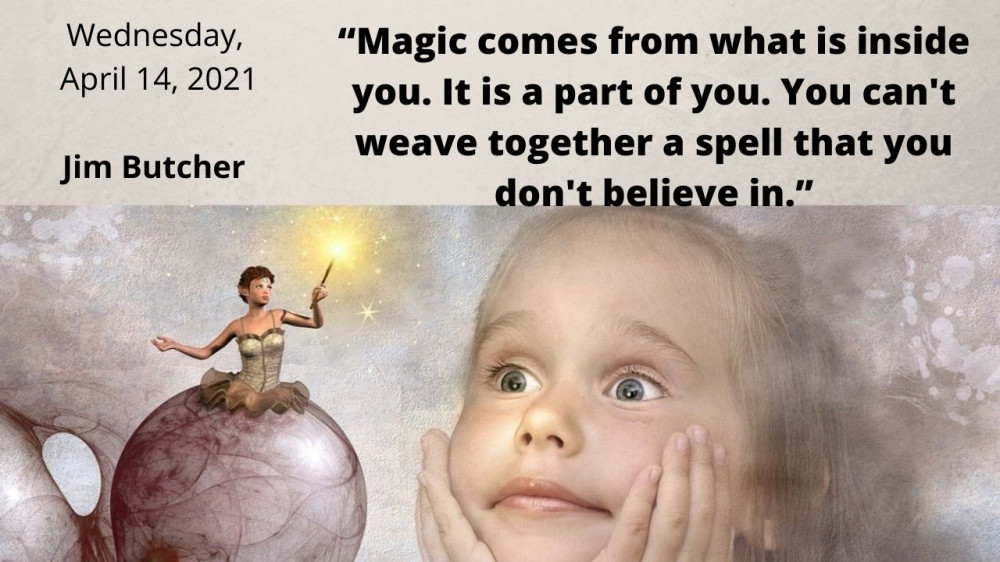 Thursday, April 15, 2021
“The appearance of things change according to the emotions, and thus we see magic and beauty in them, while the magic and beauty are really in ourselves.”
Kahlil Gibran
Gibran Khalil Gibran (January 6, 1883 – April 10, 1931), usually referred to in English as Kahlil Gibran was a Lebanese-American writer, poet, and visual artist, also considered a philosopher although he himself rejected the title. He is best known as the author of The Prophet. 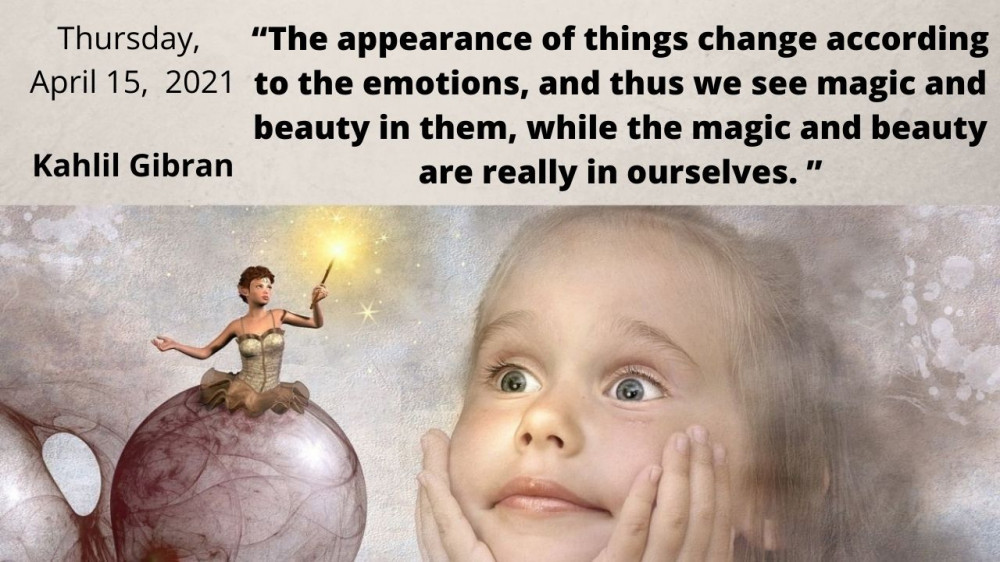 Friday, April 16, 2021
“Words and magic were in the beginning one and the same thing, and even today words retain much of their magical power.”
Sigmund Freud
Sigmund Freud ( 6 May 1856 – 23 September 1939) was an Austrian neurologist and the founder of psychoanalysis, a clinical method for treating psychopathology through dialogue between a patient and a psychoanalyst. In founding psychoanalysis, Freud developed therapeutic techniques such as the use of free association and discovered transference, establishing its central role in the analytic process. 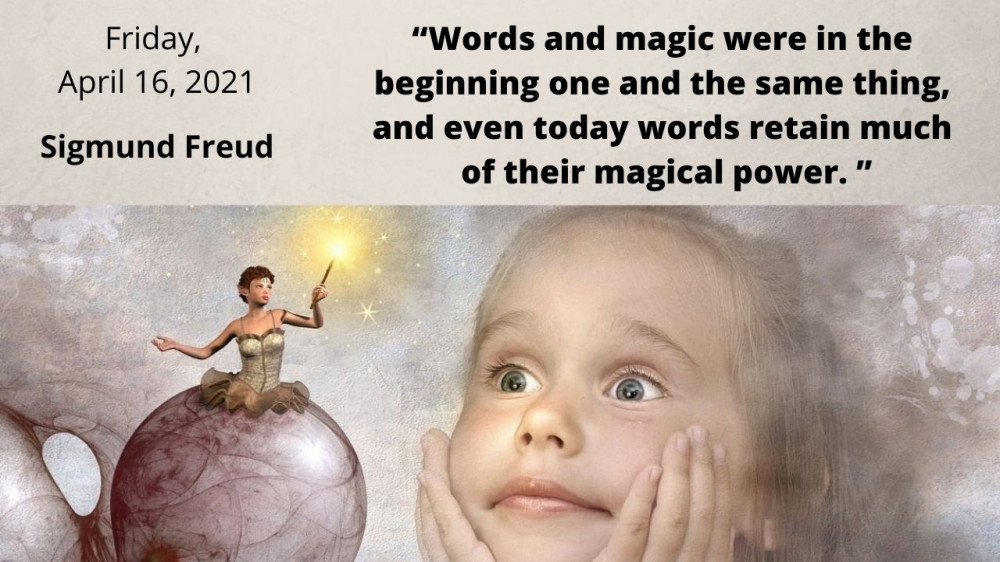 Saturday, April 17, 2021
“All good work has magic in it, and addresses the mind in a subtle way.”
Duane Michals
Duane Michals ( born February 18, 1932) is an American photographer. Michals’s work makes innovative use of photo sequences, often incorporating text to examine emotion and philosophy. He describes his photographic skills as “completely self-taught. 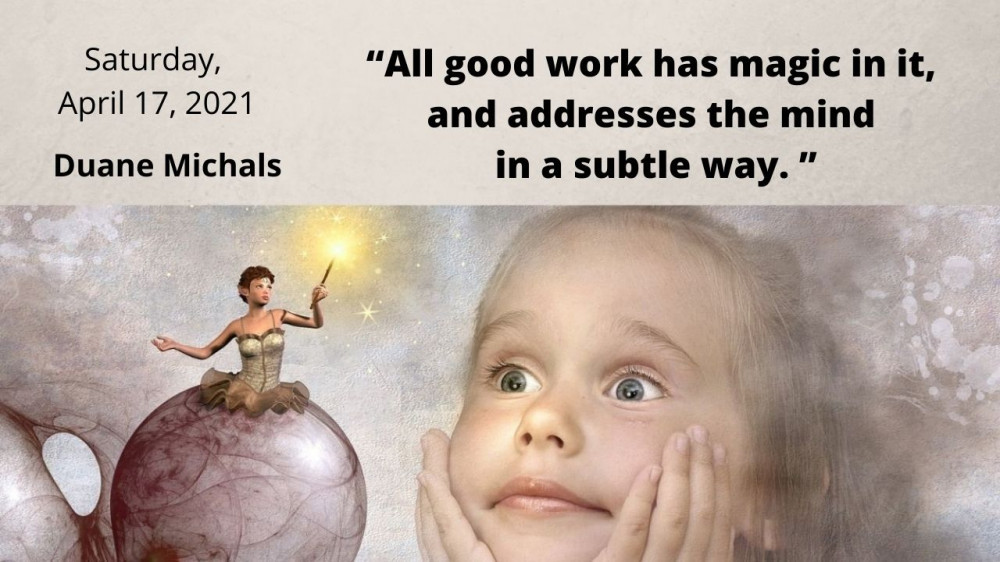 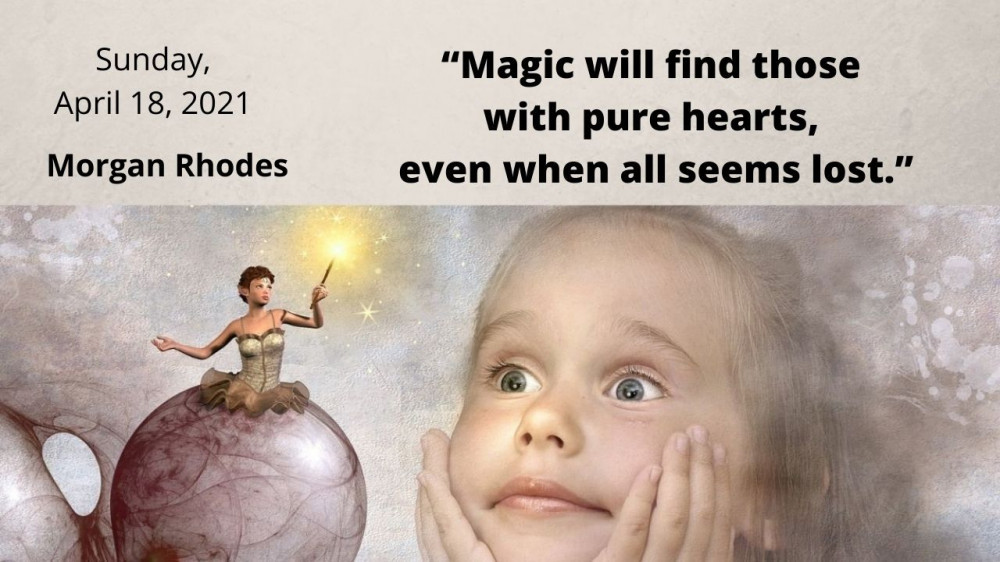 “Magic exists. Who can doubt it, when there are rainbows and wildflowers, the music of the wind and the silence of the stars? Anyone who has loved has been touched by magic. It is such a simple and such an extraordinary part of the lives we live.”
Nora Roberts

“Magic is believing in yourself, if you can do that, you can make anything happen. ”
Johann Wolfgang von Goethe

“It’s all a matter of paying attention, being awake in the present moment, and not expecting a huge payoff. The magic in this world seems to work in whispers and small kindnesses.”
Charles de Lint

“Magical places are always beautiful and deserve to be contemplated … Always stay on the bridge between the invisible and the visible.”
Paulo Coelho

“Logic only gives man what he needs… Magic gives him what he wants.”
Tom Robbins

“Courage and perseverance have a magical talisman before which difficulties disappear and obstacles vanish into air.”
John Quincy Adams

“Magic is really only the utilization of the entire spectrum of the senses. Humans have cut themselves off from their senses. Now they see only a tiny portion of the visible spectrum, hear only the loudest of sounds, their sense of smell is shockingly poor and they can only distinguish the sweetest and sourest of tastes.”
Michael Scott

“Some people are magic, and others are just the illusion of it.”
Beau Taplin

“Magic is not a practice. It is a living, breathing web of energy that, with our permission, can encase our every action.”
Dorothy Morrison

Thank you for reading my post Weekly Positive Quotes – April 12 – April 18, 2021, with famous quotes about magic.

Have a wonderful magical week,
Nina