These positive quotes are for the week of April 19 – April 25, 2021, and are famous quotes about Earth. April 22 is International Earth Day, so quotes are collected for this week in honor of Earth Day. 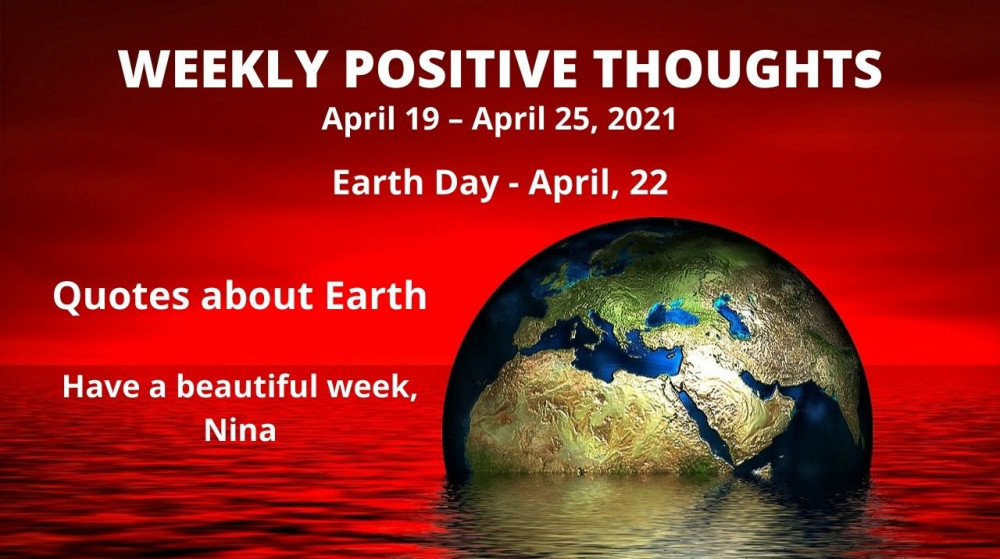 Monday, April 19, 2021
“It is spring again. The earth is like a child that knows poems by heart.”
Rainer Maria Rilke
René Karl Wilhelm Johann Josef Maria Rilke (4 December 1875 – 29 December 1926), better known as Rainer Maria Rilke was a Bohemian-Austrian poet and novelist. He is “widely recognized as one of the most lyrically intense German-language poets”. He wrote both verse and highly lyrical prose. Several critics have described Rilke’s work as “mystical”. 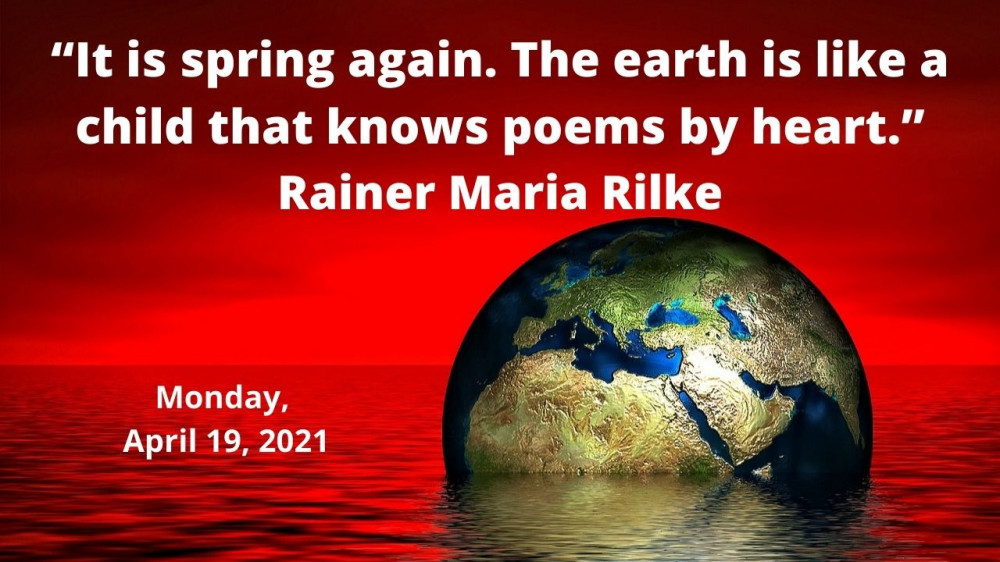 Tuesday, April 20, 2021
“Trees are poems that the earth writes upon the sky.”
Khalil Gibran
Gibran Khalil Gibran (January 6, 1883 – April 10, 1931), usually referred to in English as Kahlil Gibran, was a Lebanese-American writer, poet, and visual artist, also considered a philosopher although he himself rejected the title. He is best known as the author of The Prophet. 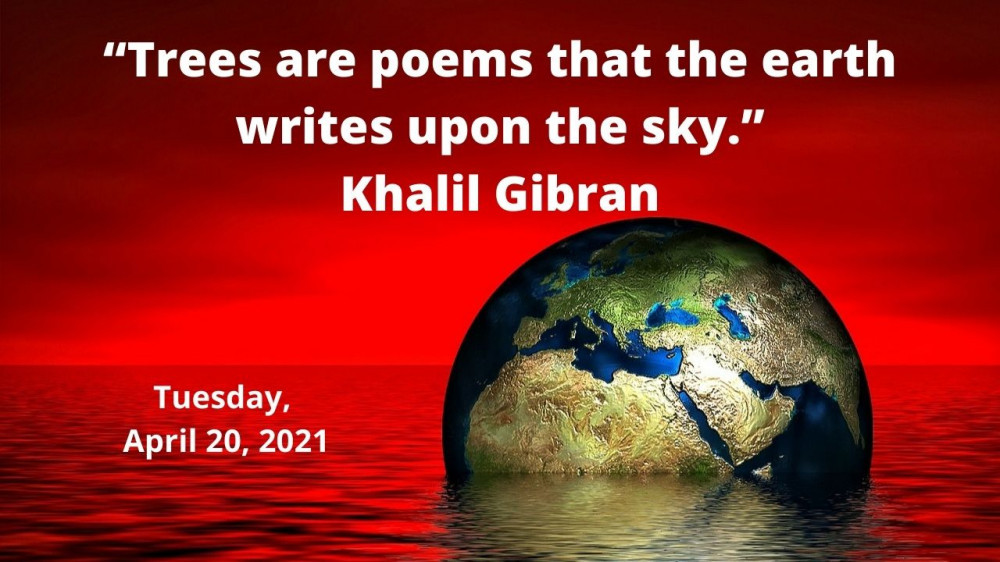 Wednesday, April 21, 2021
“Each moment spent on this bright blue planet is precious so use it carefully.”
Santosh Kalwar
Santosh Kalwar (born September 7, 1982, Nepal) is a poet, writer, and researcher. He came to study in Finland at the age of twenty-five. He has authored a number of Newspaper columns, articles, and books on truth, love, and relationships. 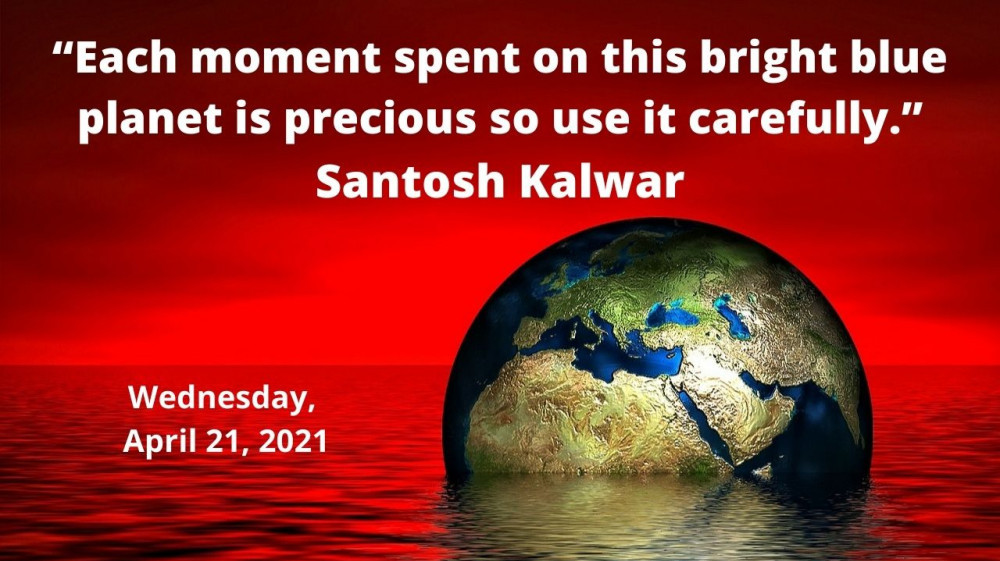 Thursday, April 22, 2021
“Earth is the holiest place in the Universe, loving the earth, and loving life is the way to generate positive vibrations.”
Amit Ray
Dr. Amit Ray (born 12 August 1960) is an Indian author and spiritual master. He is known for his teachings on meditation, yoga, peace, and compassion. He is best known for his Om meditation and integrated yoga and vipassana meditation techniques. He is the author of several books on meditation and other spiritual topics. 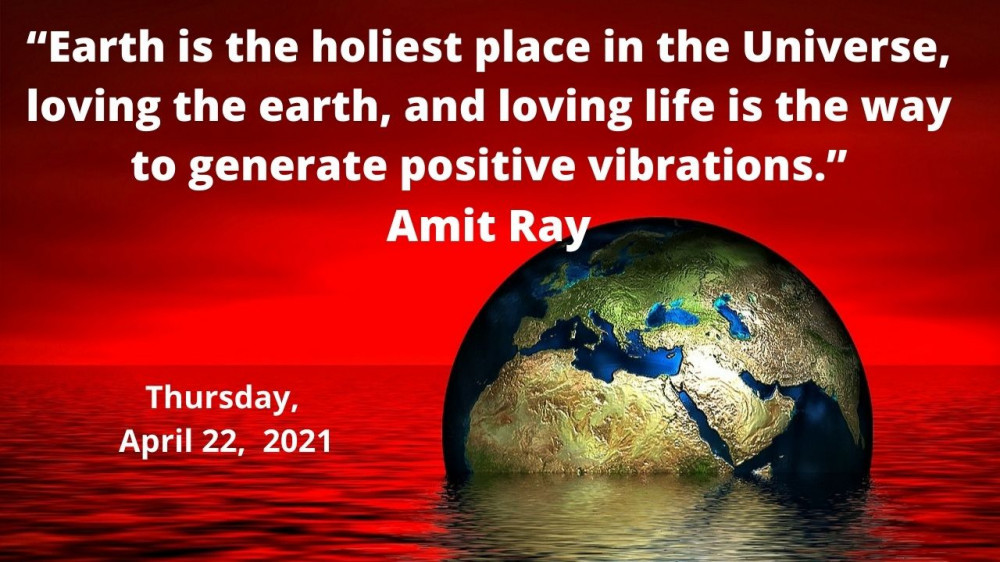 Friday, April 23, 2021
“Earth provides enough to satisfy every man’s needs, but not every man’s greed.”
Mahatma Gandhi
Mohandas Karamchand Gandhi ( 2 October 1869 – 30 January 1948) was an Indian lawyer, anti-colonial nationalist, and political ethicist, who employed nonviolent resistance to lead the successful campaign for India’s independence from British rule, and in turn, inspired movements for civil rights and freedom across the world. 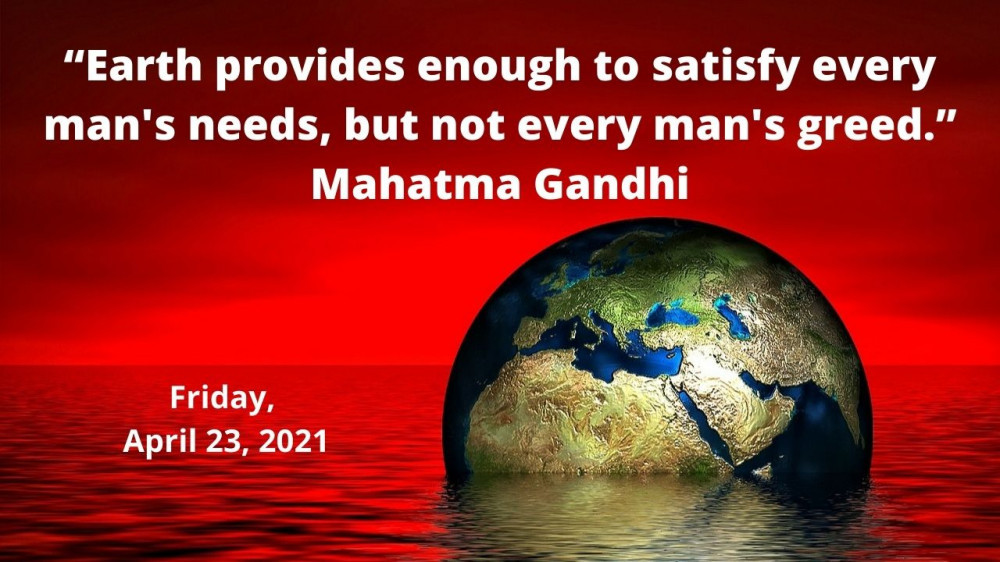 Saturday, April 24, 2021
“What you take from the earth, you must give back. That’s nature’s way.”
Chris d’Lacey
Chris D’Lacey (born 15 December 1954, Malta) is an English writer of children’s fiction, he is best known for writing The Last Dragon Chronicles. He has also written many other books including A Dark Inheritance. 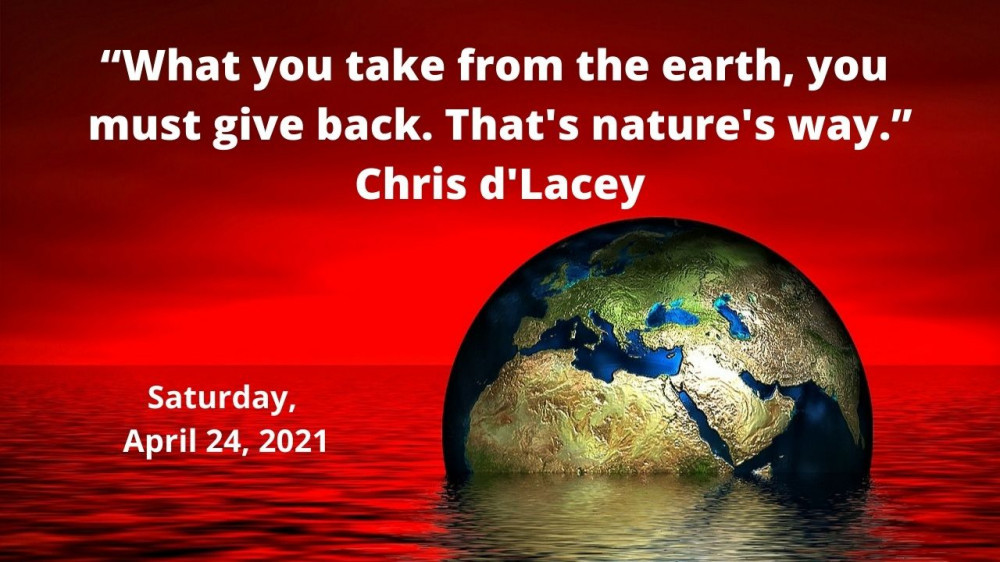 Sunday, April 25, 2021
“Find your place on the planet. Dig in, and take responsibility from there.”
Gary Snyder
Gary Snyder (born May 8, 1930) is an American man of letters. Perhaps best known as a poet, he is also an essayist, lecturer, and environmental activist with anarcho-primitivist leanings. He has been described as the “poet laureate of Deep Ecology”. Snyder is a winner of a Pulitzer Prize for Poetry and the American Book Award. His work, in his various roles, reflects an immersion in both Buddhist spirituality and nature. 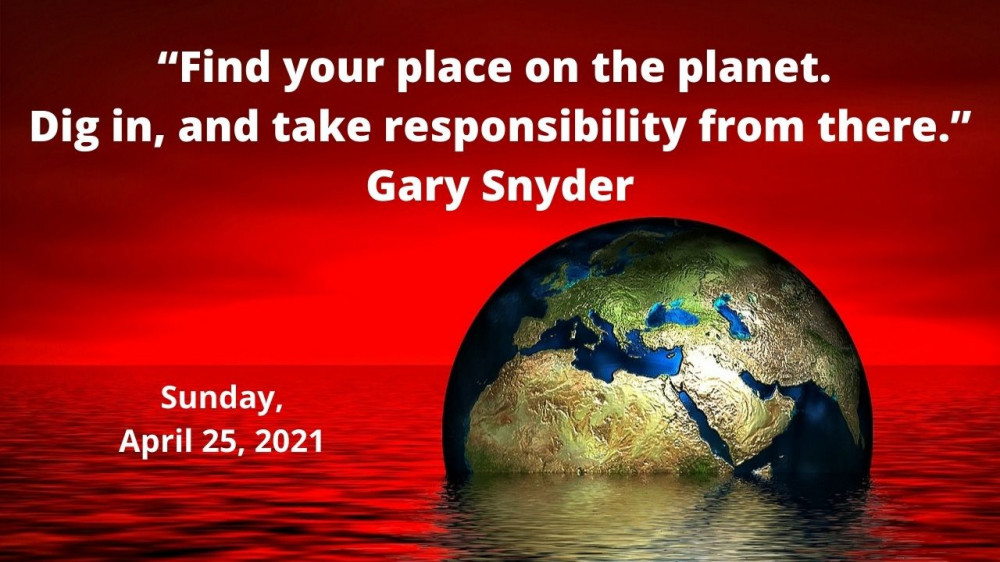 “It suddenly struck me that that tiny pea, pretty and blue, was the Earth. I put up my thumb and shut one eye, and my thumb blotted out the planet Earth. I didn’t feel like a giant. I felt very, very small.”
Neil Armstrong

“The earth will not continue to offer its harvest, except with faithful stewardship. We cannot say we love the land and then take steps to destroy it for use by future generations.”
Pope John Paul II

“Those who contemplate the beauty of the earth find reserves of strength that will endure as long as life lasts.”
Rachel Carson

“It is a wholesome and necessary thing for us to turn again to the earth and in the contemplation of her beauties to know the sense of wonder and humility. ”
Rachel Carson

“National boundaries are not evident when we view the Earth from space. Fanatical ethnic or religious or national chauvinisms are a little difficult to maintain when we see our planet as a fragile blue crescent fading to become an inconspicuous point of light against the bastion and citadel of the stars.”
Carl Sagan

“How can we be so arrogant? The planet is, was, and always will be stronger than us. We can’t destroy it; if we overstep the mark, the planet will simply erase us from its surface and carry on existing. Why don’t they start talking about not letting the planet destroy us?”
Paulo Coelho

“What is the use of a house if you haven’t got a tolerable planet to put it on?”
Henry David Thoreau

“I feel no need for any other faith than my faith in the kindness of human beings. I am so absorbed in the wonder of earth and the life upon it that I cannot think of heaven and angels.”
Pearl S. Buck

“Now we, if not in the spirit, have been caught up to see our earth, our mother, Gaia Mater, set like a jewel in space. We have no excuse now for supposing her riches inexhaustible nor the area we have to live on limitless because unbounded. We are the children of that great blue-white jewel. Through our mother, we are part of the solar system and part through that of the whole universe. In the blazing poetry of the fact we are children of the stars.”
William Golding

Thank you for reading my post Weekly Positive Quotes – April 19 – April 25, 2021, with famous quotes about Earth.