These positive quotes are for the week of April 5 – April 11, 2021, and are famous quotes about hope. Hope motivates us and leads us forward, and is especially important in today’s times. 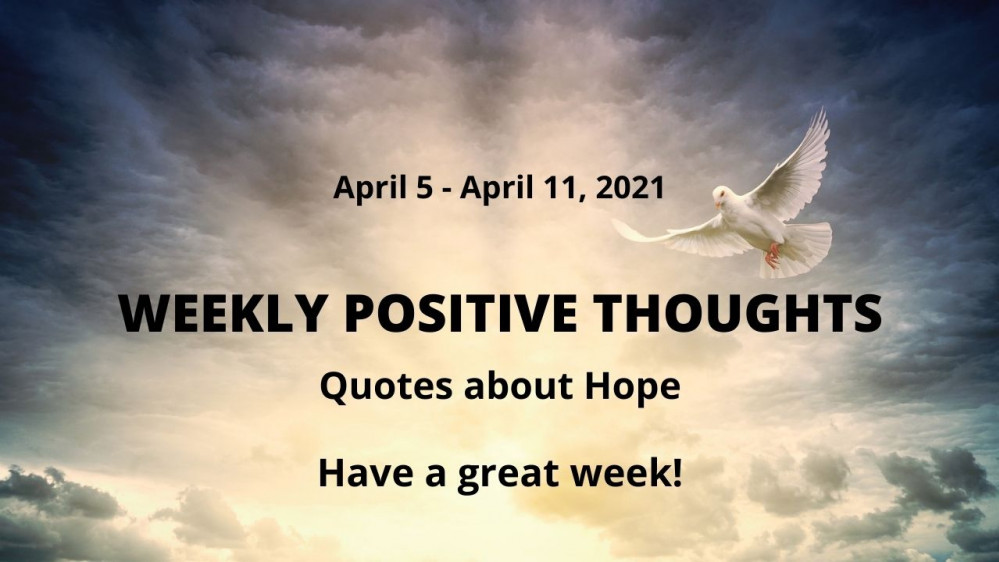 Monday, April 5, 2021
“Faith goes up the stairs that love has built and looks out the windows which hope has opened.”
Charles H. Spurgeon
Charles Haddon Spurgeon (19 June 1834 – 31 January 1892) was an English Particular Baptist preacher. Spurgeon remains highly influential among Christians of various denominations, among whom he is known as the “Prince of Preachers”. He was a strong figure in the Reformed Baptist tradition and opposing the liberal and pragmatic theological tendencies in the Church of his day. 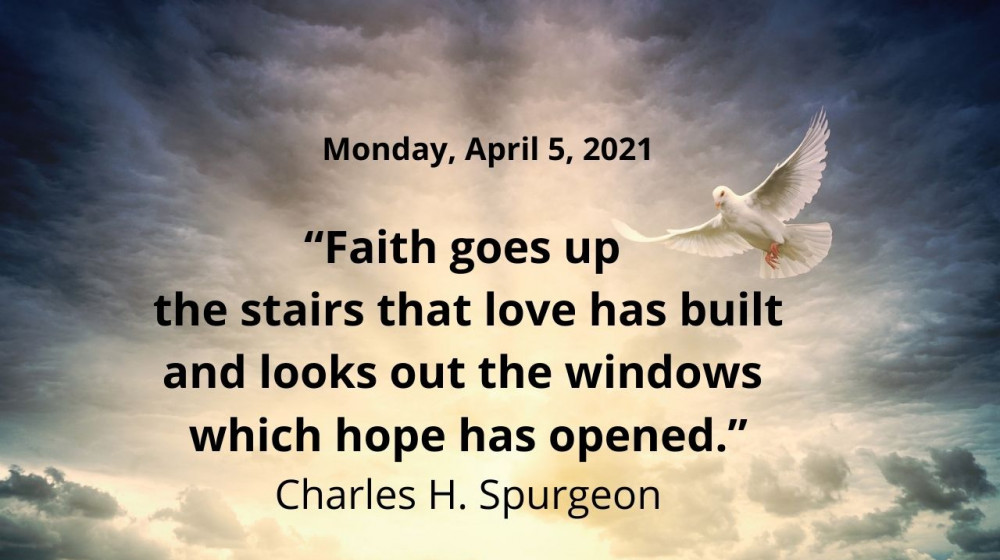 Tuesday, April 6, 2021
“Where there is no hope, it is incumbent on us to invent it.”
Albert Camus
Albert Camus (7 November 1913 – 4 January 1960) was a French philosopher, author, and journalist. He won the Nobel Prize in Literature at the age of 44 in 1957, the second-youngest recipient in history. Camus’s views contributed to the rise of the philosophy known as absurdism, a movement reacting against the rise of nihilism. He is also considered to be an existentialist, even though he firmly rejected the term throughout his lifetime. 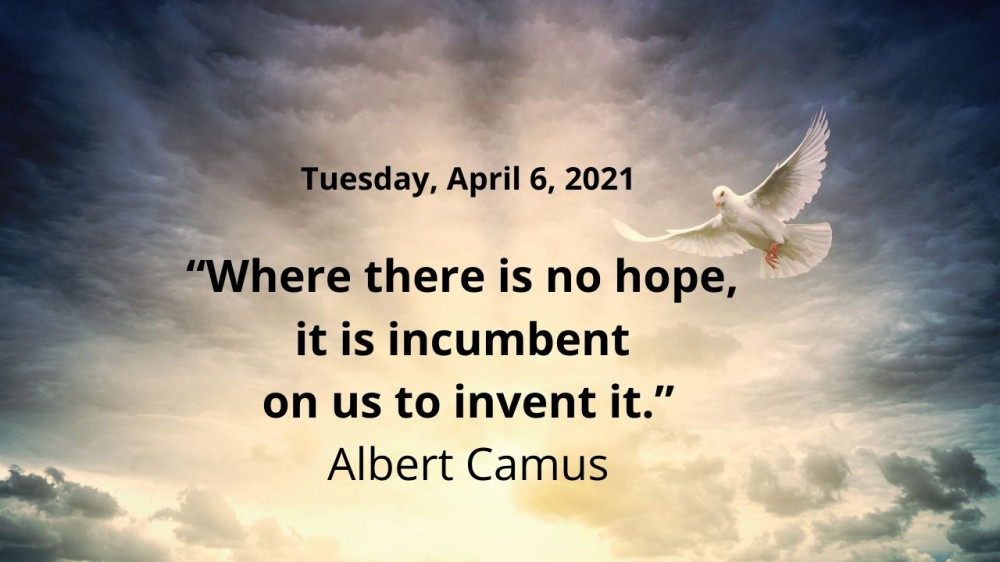 Wednesday, April 7, 2021
“Do not spoil what you have by desiring what you have not; remember that what you now have was once among the things you only hoped for.”
Epicurus
Epicurus (341–270 BC) was an ancient Greek philosopher and sage who founded Epicureanism, a highly influential school of philosophy. Epicurus and his followers were known for eating simple meals and discussing a wide range of philosophical subjects. He openly allowed women and slaves to join the school. For Epicurus, the purpose of philosophy was to help people attain a happy, tranquil life characterized by ataraxia (peace and freedom from fear) and aponia (the absence of pain). 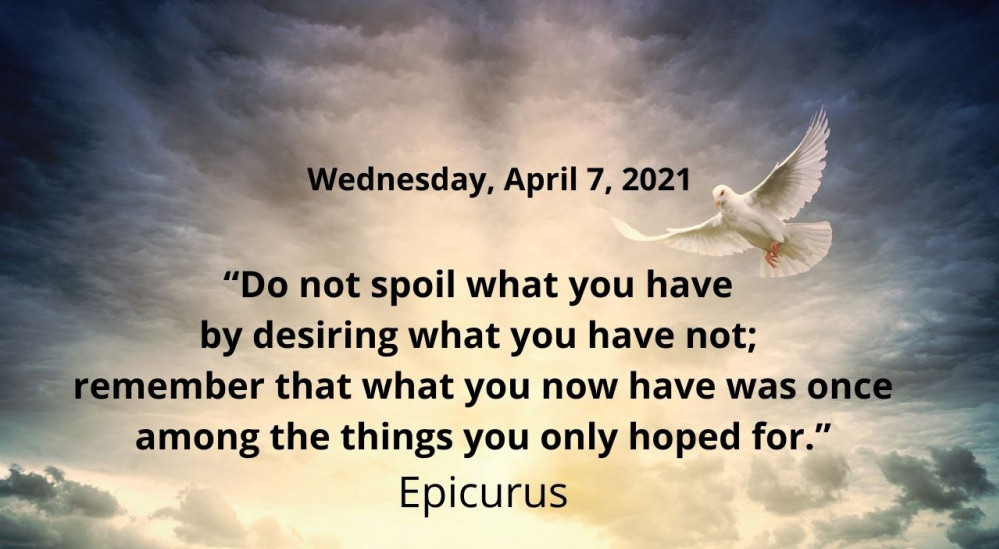 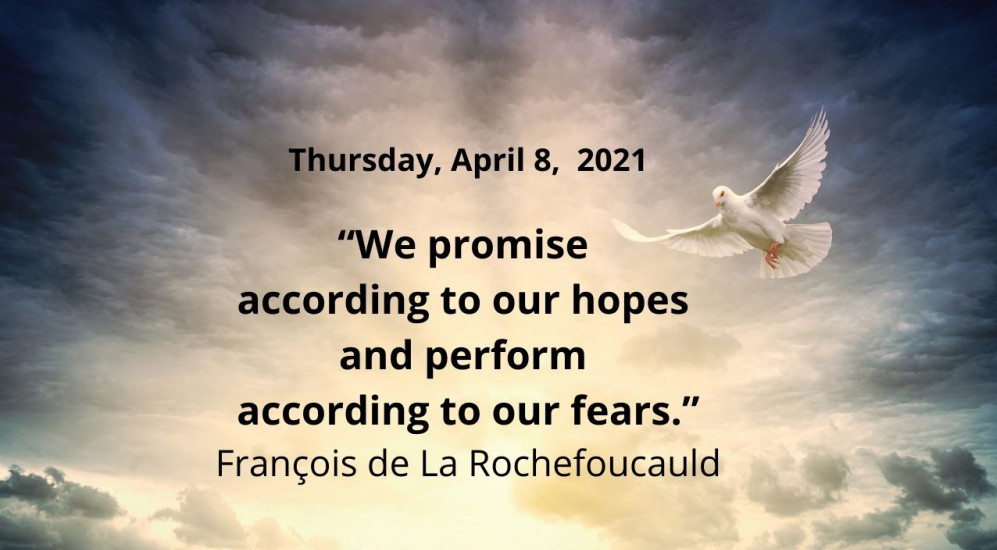 Friday, April 9, 2021
“May your choices reflect your hopes, not your fears.”
Nelson Mandela
Nelson Rolihlahla Mandela (18 July 1918 – 5 December 2013) was a South African anti-apartheid revolutionary, political leader, and philanthropist who served as President of South Africa from 1994 to 1999. He was the country’s first black head of state and the first elected in a fully representative democratic election. 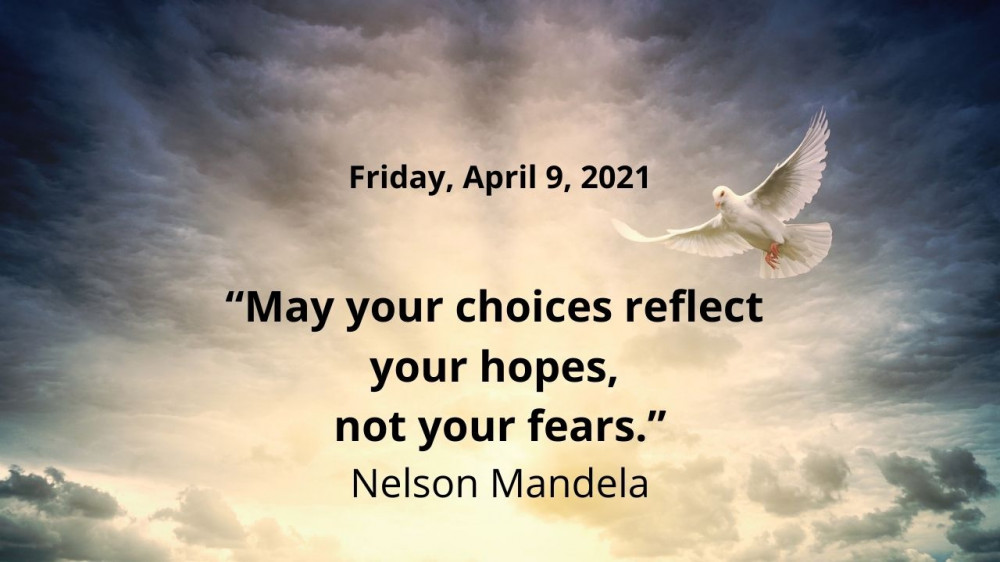 Saturday, April 10, 2021
“We must accept finite disappointment, but never lose infinite hope.”
Martin Luther King Jr.
Martin Luther King Jr. (January 15, 1929 – April 4, 1968) was an African American Baptist minister and activist who became the most visible spokesperson and leader in the American civil rights movement from 1955 until his assassination in 1968. King advanced civil rights through nonviolence and civil disobedience, inspired by his Christian beliefs and the nonviolent activism of Mahatma Gandhi. 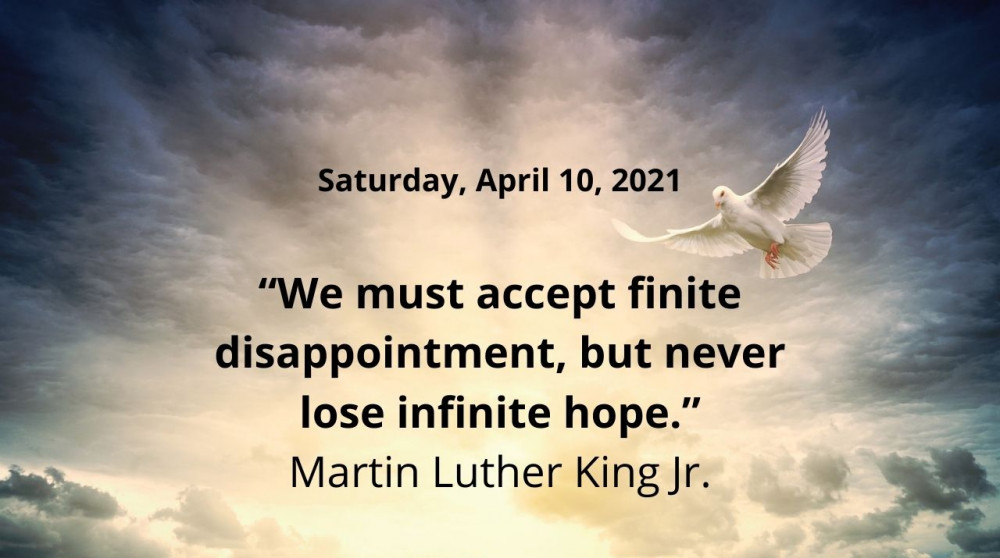 Sunday, April 11, 2021
“Rules for happiness: something to do, someone to love, something to hope for.”
Immanuel Kant
Immanuel Kant (22 April 1724 – 12 February 1804) was a German philosopher and one of the central Enlightenment thinkers.
Kant’s comprehensive and systematic works in epistemology, metaphysics, ethics, and aesthetics have made him one of the most influential figures in modern Western philosophy. 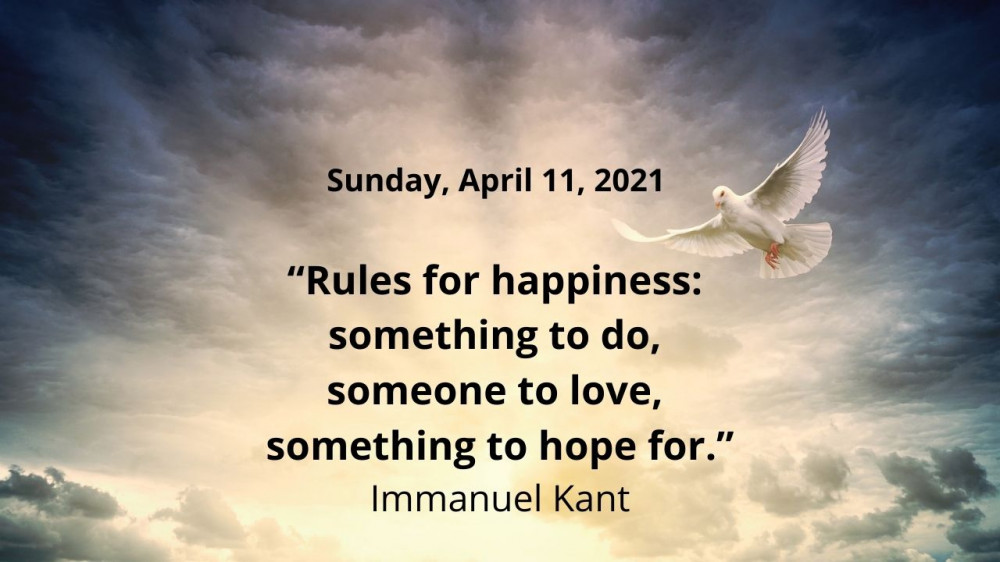 “It’s really a wonder that I haven’t dropped all my ideals, because they seem so absurd and impossible to carry out. Yet I keep them because, in spite of everything, I still believe that people are really good at heart.”
Anne Frank

“You cannot swim for new horizons until you have the courage to lose sight of the shore.”
William Faulkner

“Blessed is he who expects nothing, for he shall never be disappointed.”
Alexander Pope

“The very least you can do in your life is figure out what you hope for. And the most you can do is live inside that hope. Not admire it from a distance but live right in it, under its roof.”
Barbara Kingsolver

“We dream to give ourselves hope. To stop dreaming – well, that’s like saying you can never change your fate.”
Amy Tan

“There is a saying in Tibetan, ‘Tragedy should be utilized as a source of strength.’
No matter what sort of difficulties, how painful experience is, if we lose our hope, that’s our real disaster.”
Dalai Lama XIV

“Hope itself is like a star- not to be seen in the sunshine of prosperity, and only to be discovered in the night of adversity. ”
C.H. Spurgeon

“Difficulties and adversities viciously force all their might on us and cause us to fall apart, but they are necessary elements of individual growth and reveal our true potential. We have got to endure and overcome them, and move forward. Never lose hope. Storms make people stronger and never last forever.”
Roy T. Bennett

“Each time a man stands up for an ideal, or acts to improve a lot of others, or strikes out against injustice, he sends forth a tiny ripple of hope, and crossing each other from a million different centers of energy and daring those ripples to build a current which can sweep down the mightiest walls of oppression and resistance.”
Robert F. Kennedy

“Remember, Hope is a good thing, maybe the best of things, and no good thing ever dies.”
Stephen King

“The road that is built in hope is more pleasant to the traveler than the road built in despair, even though they both lead to the same destination.”
Marion Zimmer Bradley

“You do not need to know precisely what is happening, or exactly where it is all going. What you need is to recognize the possibilities and challenges offered by the present moment, and to embrace them with courage, faith, and hope.”
Thomas Merton

“Plant seeds of happiness, hope, success, and love; it will all come back to you in abundance. This is the law of nature.”
Steve Maraboli