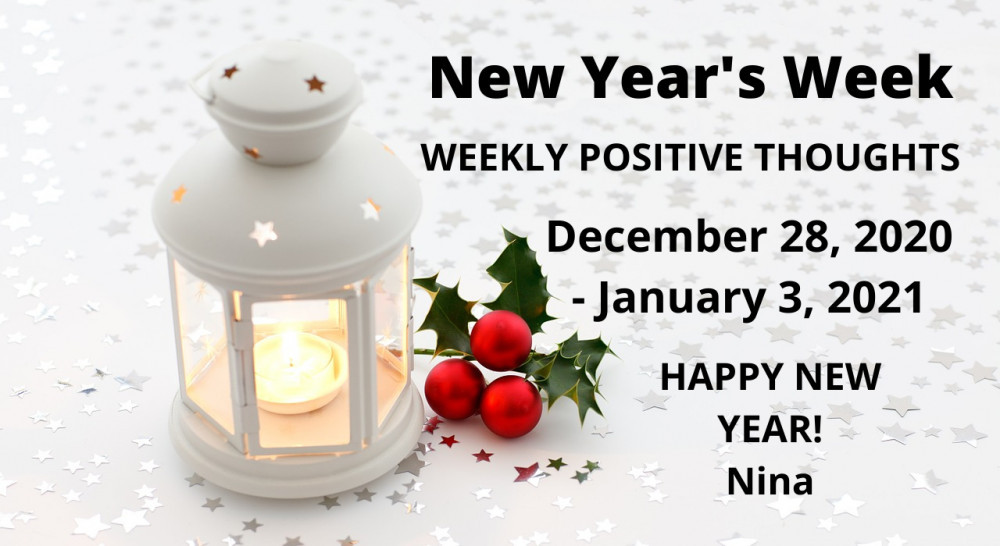 These positive quotes are for the week December 28, 2020 – January 3, 2021, and are quotes about candles. We light candles a lot during this December holiday season, and I found this theme very appropriate.

Every Sunday, I prepare positive thoughts for each day for the coming week and post them in the form of a video on YouTube and here on the website. You are invited to come every Sunday to see the new weekly thoughts.

“A candle loses nothing when it lights another candle.”

Thomas Jefferson (April 13, 1743 – July 4, 1826) was an American statesman, diplomat, lawyer, architect, philosopher, and Founding Father who served as the third president of the United States from 1801 to 1809. 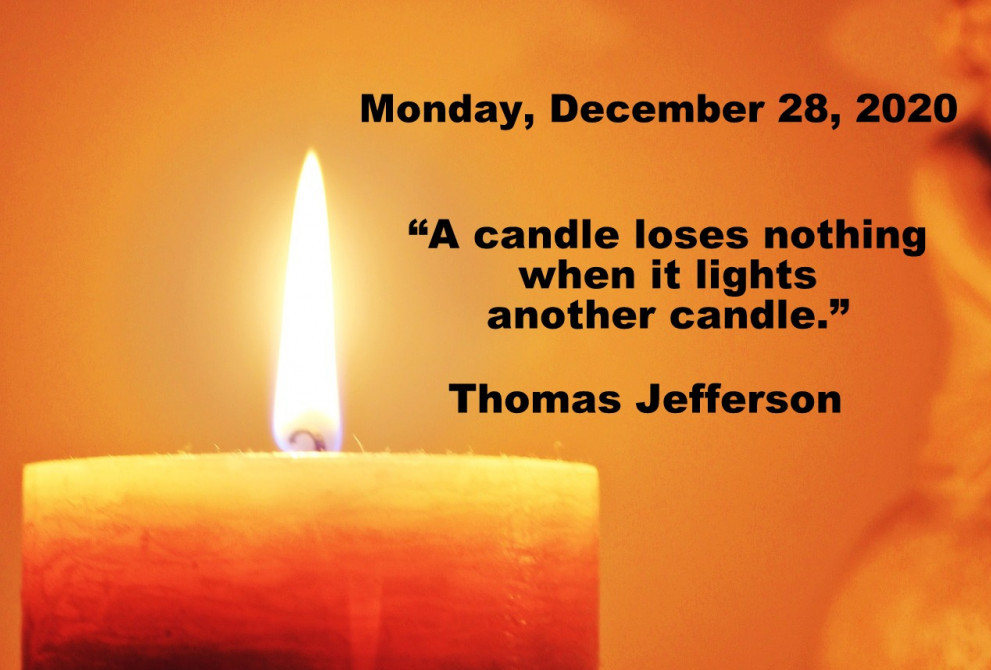 »One idea lights a thousand candles.«

Ralph Waldo Emerson (May 25, 1803 – April 27, 1882), who went by his middle name Waldo, was an American essayist, lecturer, philosopher, and poet who led the transcendentalist movement of the mid-19th century. He was seen as a champion of individualism and a prescient critic of the countervailing pressures of society. 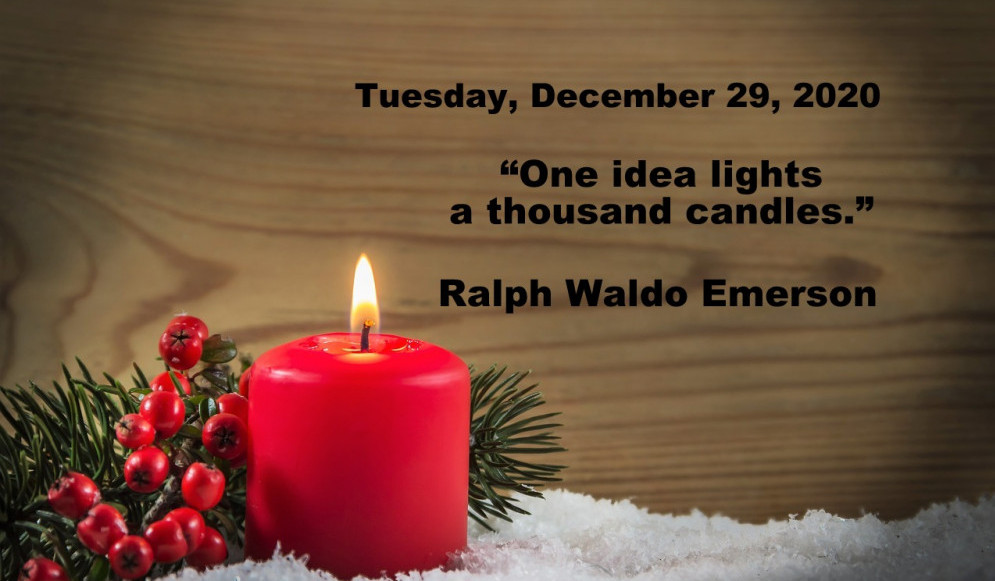 »All the darkness in the world cannot extinguish the light of a single candle.«

Francis of Assisi (born Giovanni di Pietro di Bernardone;  1181 or 1182 – 1226), venerated as Saint Francis of Assisi, also known in his ministry as Francesco, was an Italian Catholic friar, deacon, mystic, and preacher. He founded the men’s Order of Friars Minor, the women’s Order of Saint Clare, the Third Order of Saint Francis and the Custody of the Holy Land. Francis is one of the most venerated religious figures in Christianity.

Dante Alighieri, often referred to simply as Dante (1265 – 1321), was an Italian poet, writer and philosopher. His Divine Comedy, originally called Comedìa (modern Italian: Commedia) and later christened Divina by Giovanni Boccaccio, is widely considered the most important poem of the Middle Ages and the greatest literary work in the Italian language. 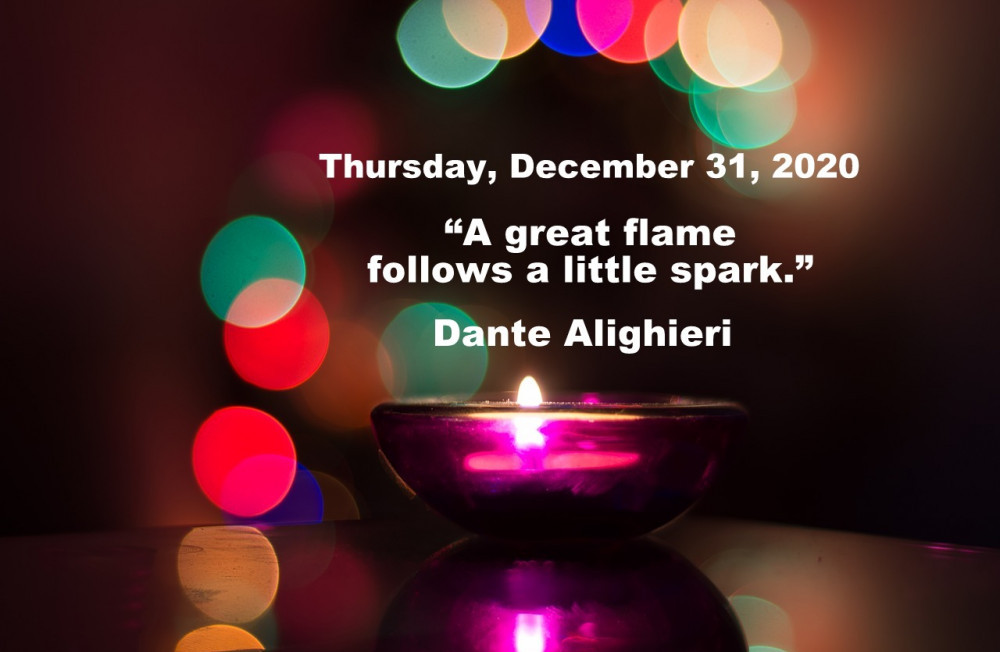 »Live as intensely as possible, burn your candle of life from both ends.«

Rajneesh (11 December 1931 – 19 January 1990), also known as Acharya Rajneesh, Bhagwan Shri Rajneesh, and later as Osho, was an Indian godman, mystic, and founder of the Rajneesh movement. During his lifetime, he was viewed as a controversial new religious movement leader and mystic. In the 1960s, he traveled throughout India as a public speaker and was a vocal critic of socialism. 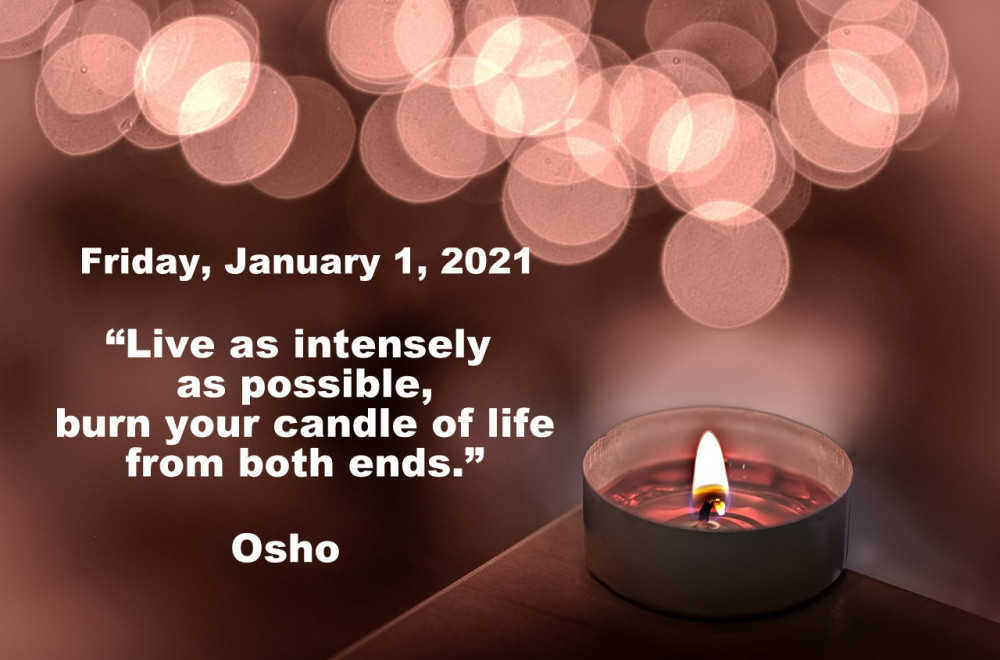 »Look at how a single candle can both defy and define the darkness.«
Anne Frank

Annelies Marie “Anne” Frank (12 June 1929 – February or March 1945) was a German-Dutch diarist of Jewish origin. One of the most discussed Jewish victims of the Holocaust, she gained fame posthumously with the publication of The Diary of a Young Girl, in which she documents her life in hiding from 1942 to 1944, during the German occupation of the Netherlands in World War II. It is one of the world’s best-known books and has been the basis for several plays and films. 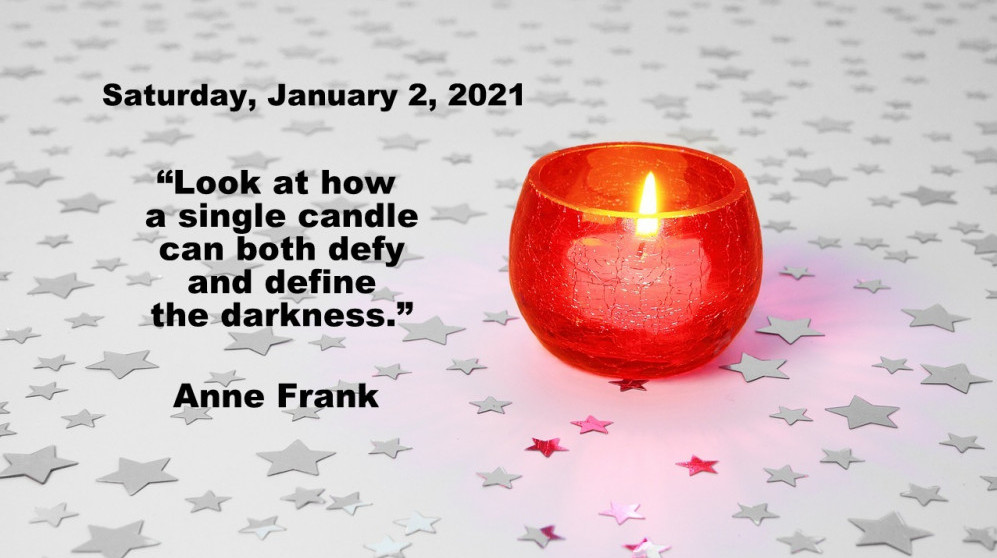 »There is a candle in your heart, ready to be kindled.«

Jalāl ad-Dīn Muhammad Rūmī, and more popularly simply as Rumi (30 September 1207 – 17 December 1273), was a 13th-century Persian poet, Hanafi faqih, Islamic scholar, Maturidi theologian, and Sufi mystic. His poems have been widely translated into many of the world’s languages and transposed into various formats. Rumi’s works are written mostly in Persian, but occasionally he also used Turkish, Arabic, and Greek in his verse. 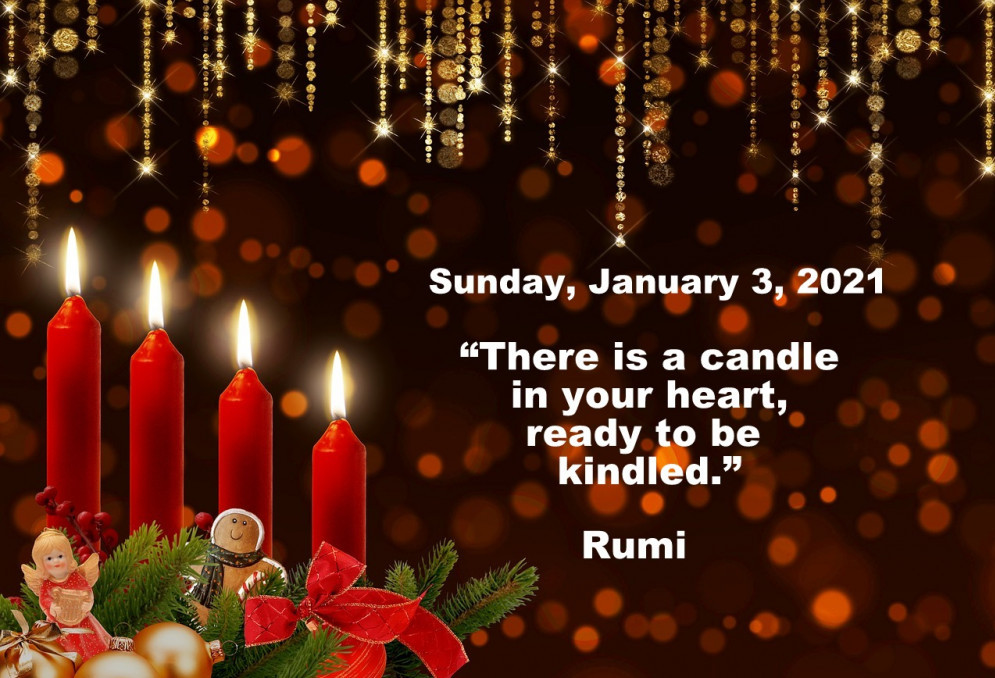 »It is better to light one small candle of gratitude than to curse the
darkness.«
Confucius

»There are two ways of spreading light: to be the candle or the mirror that reflects it.«
Edith Wharton

»Instead of cursing the darkness, light a candle.«
Benjamin Franklin

»Do not worry if all the candles in the world flicker and die. We have the spark that starts the fire.«
Rumi

»When the sun sets, the candle starts seeing itself like the sun!«
Mehmet Murat ildan

»No wonder God chose this dark land to send prophets to, for a candle only shines in the dark.«
Rami Ollaik

»Just as a candle cannot burn without fire, men cannot live without a spiritual life.«

»To light a candle is to cast a shadow.«
Ursula K. Le Guin

»A good teacher is like a candle – it consumes itself to light the way for others.«
Mustafa Kemal Ataturk

»Do not give them a candle to light the way, teach them how to make fire instead. That is the meaning of enlightenment.«
Kamand Kojouri

My New Year’s greetings to you

Let our guide in 2021 be: If you don’t see the way out, it’s still the way through!
Happy New Year with best wishes! 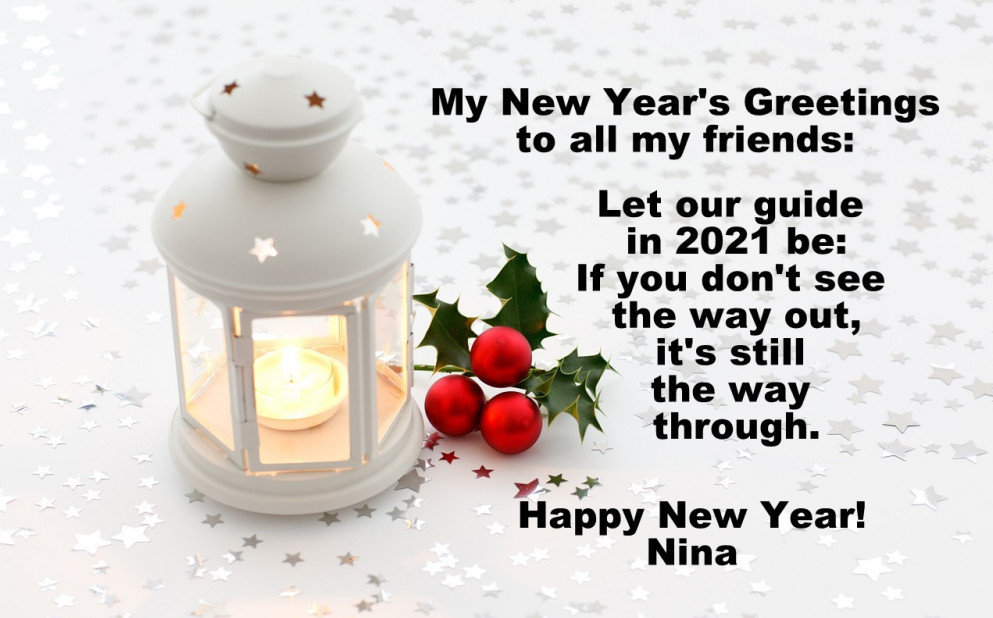 I prepare a video with new positive thoughts for the coming week every Sunday, with proverbs, or quotes from famous writers, poets, philosophers, celebrities, and photos from different authors, and post it on YouTube. You can watch this week video on this link:
Weekly Positive Thoughts (December 28, 2020 – January 3, 2021)

You can watch other weekly videos on this link:
Weekly Positive Thoughts – All

Thank you for reading my post Weekly Positive Quotes – December 28, 2020 – January 3, 2021. Do you have a favorite quote on the topic of candles or which one touched you the most in the collection of quotes for this week? I will be happy if you share your thoughts with me and write a comment. Your feedback means a lot to me.