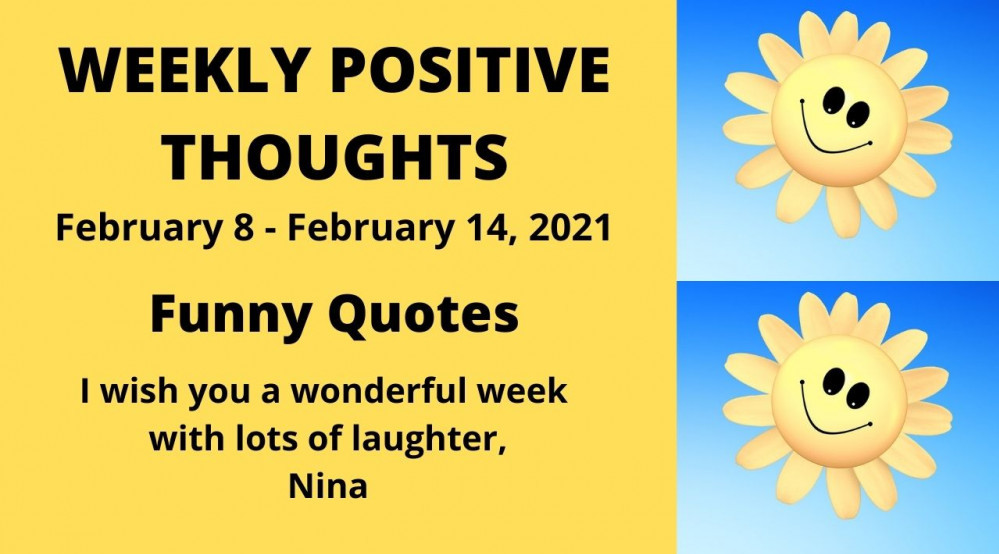 These positive quotes are for the week of February 8, 2021 – February 14, 2021, and are famous funny quotes. Given that Sunday, February 14th is Valentine’s Day, everyone will be writing and posting on this topic this week, so I decided this week is right for some laughs and smiles.

Every Sunday I post a new video and article with positive quotes for next week with which I want to brighten up your moment, day, and whole week.

Monday, February 8, 2021
»If you are always trying to be normal, you will never know how amazing you can be.«
Maya Angelou
Maya Angelou (born Marguerite Annie Johnson; April 4, 1928 – May 28, 2014) was an American poet, memoirist, and civil rights activist. She published seven autobiographies, three books of essays, several books of poetry, and is credited with a list of plays, movies, and television shows spanning over 50 years. She received dozens of awards and more than 50 honorary degrees. 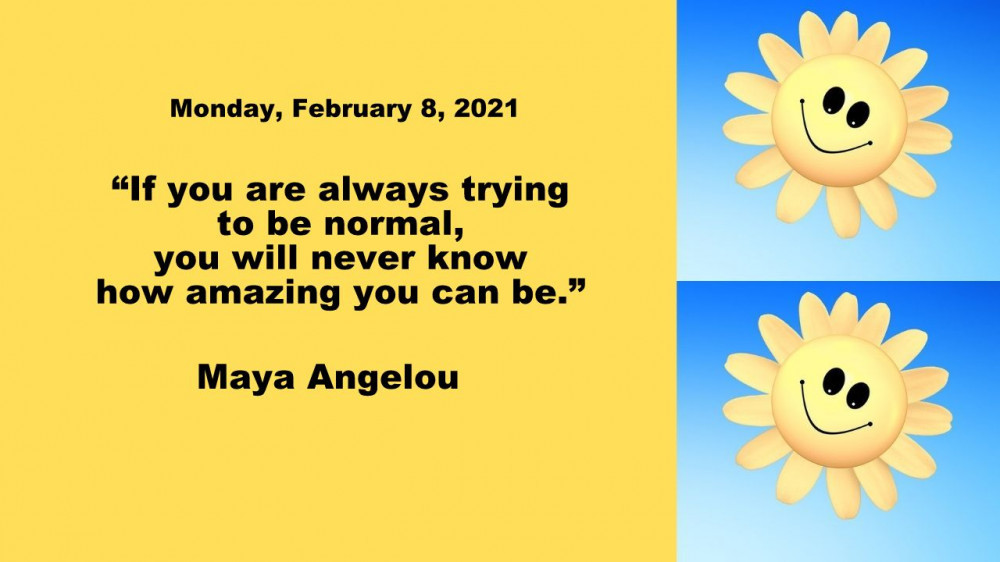 Tuesday, February 9, 2021
»Have no fear of perfection. You’ll never reach it.«
Salvador Dali
Salvador Domingo Felipe Jacinto Dalí i Domènech, 1st Marquess of Dalí de Púbol (11 May 1904 – 23 January 1989) was a Spanish surrealist artist renowned for his technical skill, precise draftsmanship, and the striking and bizarre images in his work. Influenced by Impressionism and the Renaissance masters from a young age, he became increasingly attracted to Cubism and avant-garde movements. 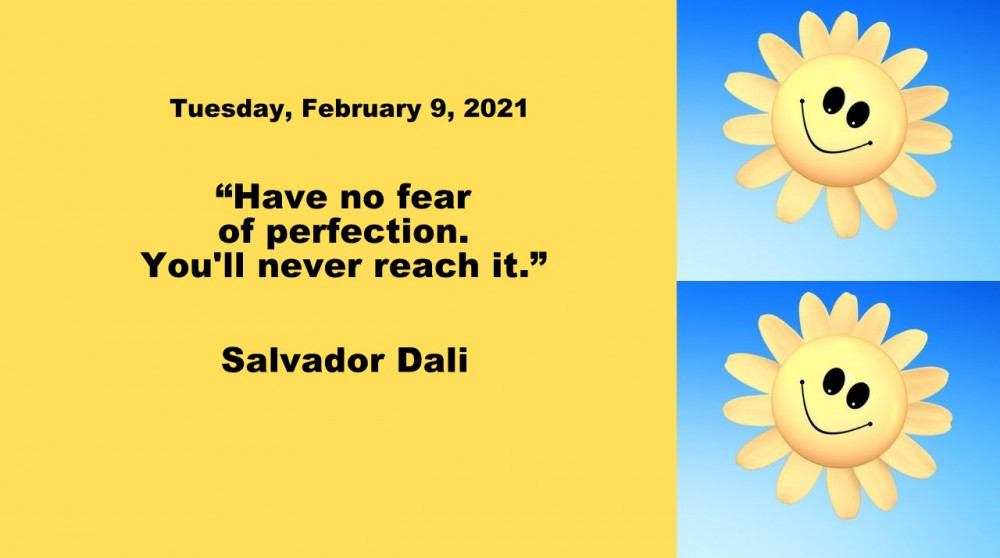 Wednesday, February 10, 2021
»The truth will set you free, but first, it will piss you off.«
Joe Klaas
Joe Klaas (March 24, 1920 – February 25, 2016) earned a Masters Degree from the University of Washington in Creative Writing. He went on to author many books including Amelia Earhart Lives, The 12 Steps to Happiness. His most notable book, Maybe I’m Dead, a New York Times bestseller, chronicled Joe’s 2-year internment in a Nazi prison camp during WWII and subsequent sub-zero death march through Poland. Joe flew Spitfires as a fighter pilot for the Royal Air Force and United States Air Force and retired from the Air Force Reserve with the rank of Lieutenant Colonel. 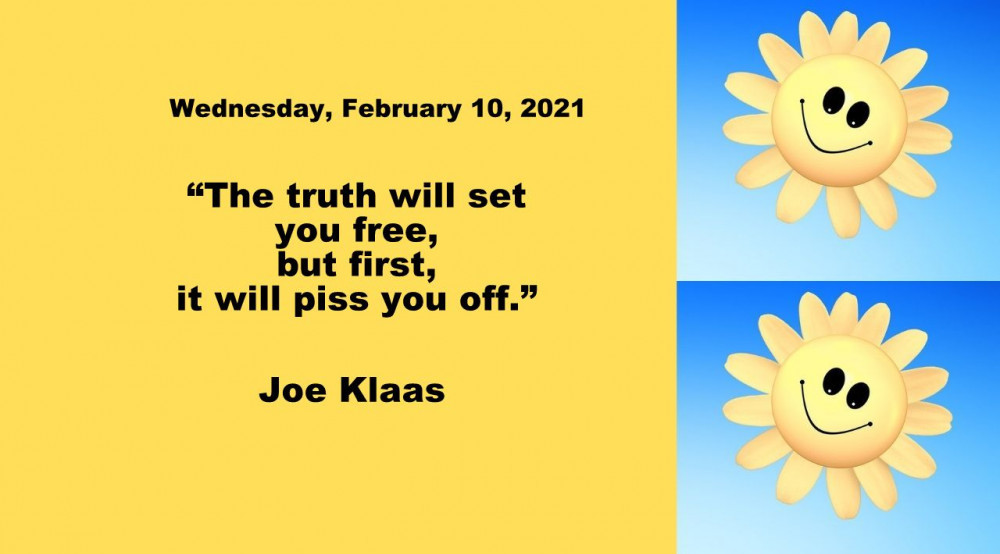 Thursday, February 11, 2021
»If a cluttered desk is a sign of a cluttered mind, of what, then, is an empty desk a sign?«
Albert Einstein
Albert Einstein (14 March 1879 – 18 April 1955) was a German-born theoretical physicist who developed the theory of relativity, one of the two pillars of modern physics (alongside quantum mechanics). His work is also known for its influence on the philosophy of science. The son of a salesman who later operated an electrochemical factory, Einstein was born in the German Empire, but moved to Switzerland in 1895, forsaking his German citizenship the following year. Specializing in physics and mathematics, he received his academic teaching diploma from the Swiss Federal Polytechnic School in Zürich in 1900. The following year, he acquired Swiss citizenship, which he kept for his entire life. 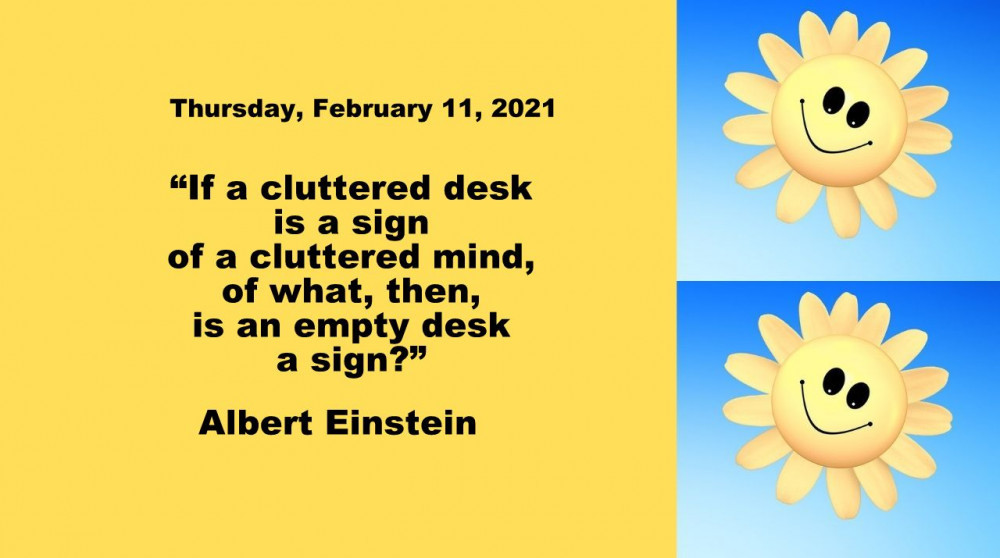 Friday, February 12, 2021
»If there are no stupid questions, then what kind of questions do stupid people ask? Do they get smart just in time to ask questions?«
Scott Adams
Scott Raymond Adams (born June 8, 1957) is the artist and creator of the Dilbert comic strip, and the author of several nonfiction works of satire, commentary, and business. His Dilbert series came to national prominence through the downsizing period in 1990s America and was then distributed worldwide. Adams worked in various roles at big businesses before he became a full-time cartoonist in 1995. He writes in a satirical, often sarcastic way about the social and psychological landscape of white-collar workers in modern business corporations. 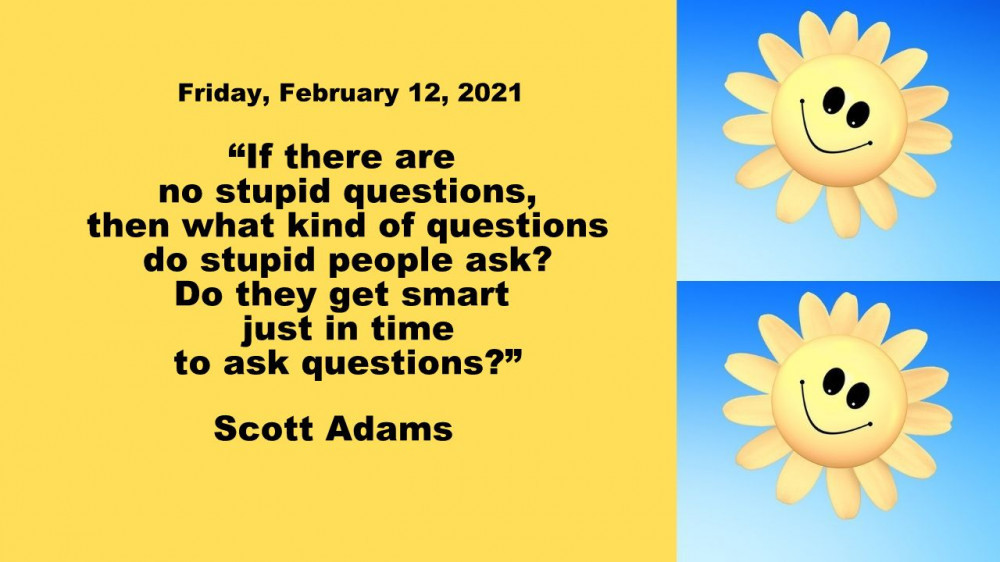 Saturday, February 13, 2021
»I have tried to know absolutely nothing about a great many things, and I have succeeded fairly well.«
Robert Benchley
Robert Charles Benchley (September 15, 1889 – November 21, 1945) was an American humorist best known for his work as a newspaper columnist and film actor. From his beginnings, at The Harvard Lampoon while attending Harvard University, through his many years writing essays and articles for Vanity Fair and The New Yorker and his acclaimed short films, Benchley’s style of humor brought him respect and success during his life. Benchley is best remembered for his contributions to The New Yorker, where his essays, whether topical or absurdist, influenced many modern humorists. 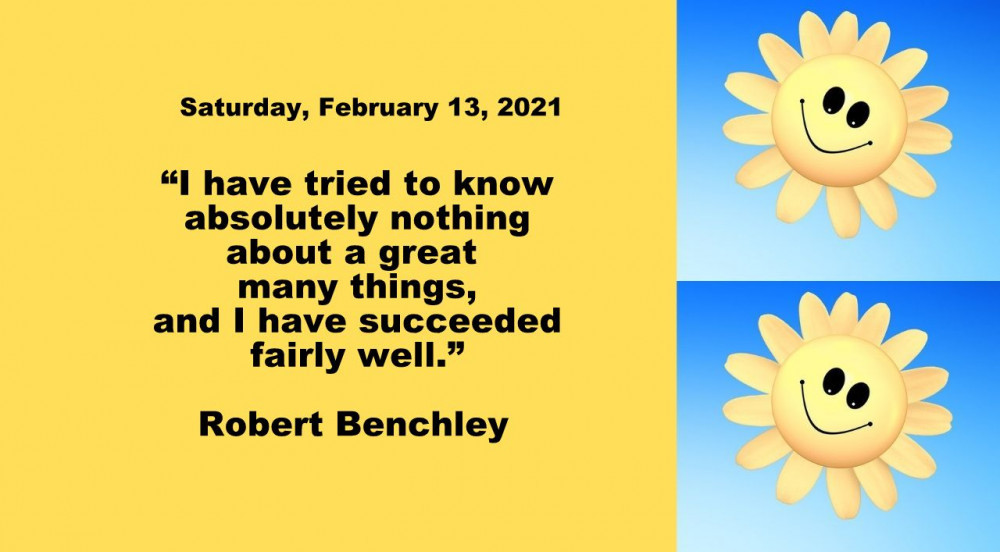 Sunday, February 14, 2021
»I am an idealist. I don’t know where I’m going, but I’m on my way.«
Carl Sandburg
Carl August Sandburg (January 6, 1878 – July 22, 1967) was a Swedish-American poet, biographer, journalist, and editor. He won three Pulitzer Prizes: two for his poetry and one for his biography of Abraham Lincoln. During his lifetime, Sandburg was widely regarded as “a major figure in contemporary literature”, especially for volumes of his collected verse, including Chicago Poems (1916), Cornhuskers (1918), and Smoke and Steel (1920). 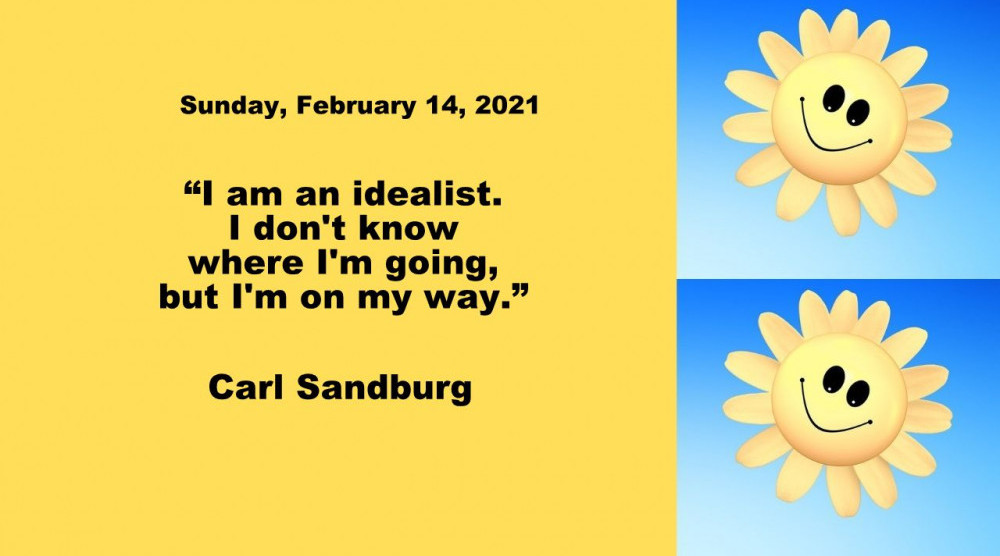 »I am so clever that sometimes I don’t understand a single word of what I am saying.«
Oscar Wilde

»Always borrow money from a pessimist. He won’t expect it back.«
Oscar Wilde

»Always forgive your enemies; nothing annoys them as much.«
Oscar Wilde

»The great thing about getting older is that you don’t lose all the other ages you’ve been.«
Madeleine L’Engle

»I didn’t fail the test. I just found 100 ways to do it wrong.«
Benjamin Franklin

»You must learn from the mistakes of others. You can’t possibly live long enough to make them all yourself.«
Sam Levenson

»The road to success is dotted with many tempting parking spaces.«
Will Rogers

»Better to remain silent and be thought a fool than to speak out and remove all doubt.«
Abraham Lincoln

»I cook with wine, sometimes I even add it to the food.«
W. C. Fields

»You can learn many things from children. How much patience you have, for instance.«
Franklin P. Jones

»Time is a great teacher, but unfortunately it kills all its pupils.«
Louis Hector Berlioz

»A smile is an inexpensive way to change your looks.«
Charles Gordy
»A bank is a place that will lend you money if you can prove that you don’t need it.«
Bob Hope

»An economist is an expert who will know tomorrow why the things he predicted yesterday didn’t happen today.«
Laurence J. Peter

»A study of economics usually reveals that the best time to buy anything is last year.«
Marty Allen

»If at first you don’t succeed, then skydiving definitely isn’t for you.«
Steven Wright

»The difference between genius and stupidity is; genius has its limits.«
Albert Einstein

»I was asked to name all the presidents. I thought they already had names.«
Demitri Martin

»Middle age is when you can still do everything you used to do – but you decide you’ll do it tomorrow.«
Dr. Tom Haggai

I prepare a video with new positive thoughts for the coming week every Sunday, with proverbs, or quotes from famous writers, poets, philosophers, celebrities, and photos from different authors, and post it on YouTube. You can watch this week video on this link:
Weekly Positive Thoughts (February 8 – February 14, 2021)

Thank you for reading my post Weekly Positive Quotes – February 8 – February 14, 2021, with funny quotes. This week I opted for a lightweight theme. I hope you smiled at some quote and brightened up the moment in a humorous way.

Have a wonderful week with lots of laughter,
Nina