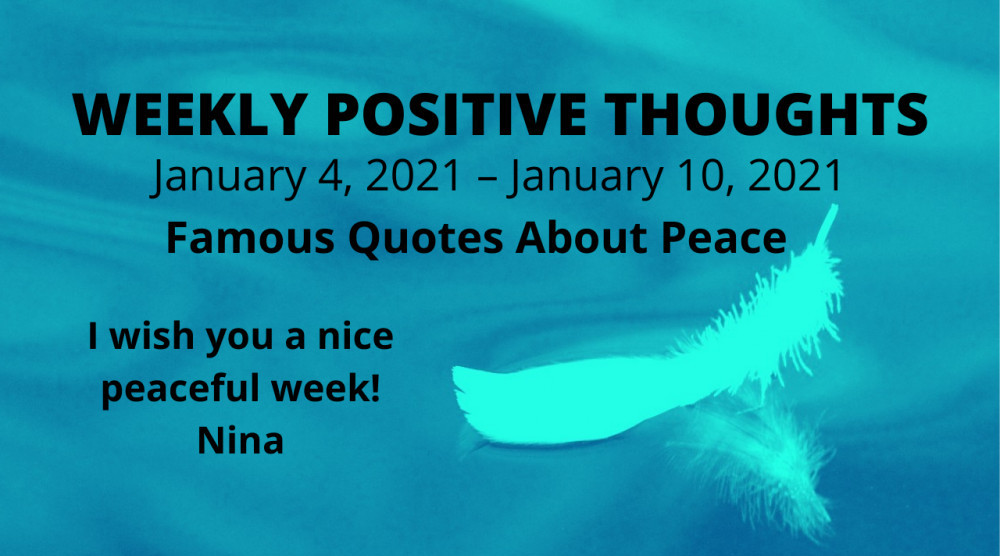 January 1 was World Peace Day. My opinion is that we should strive for peace all the time, so I devoted this week to this topic and collected famous quotes about peace.

Mother Mary Teresa Bojaxhiu (26 August 1910 – 5 September 1997), honored in the Catholic Church as Saint Teresa of Calcutta, was an Albanian-Indian Roman Catholic nun and missionary. She was born in Skopje (now the capital of North Macedonia), then part of the Kosovo Vilayet of the Ottoman Empire. After living in Skopje for eighteen years, she moved to Ireland and then to India, where she lived for most of her life. 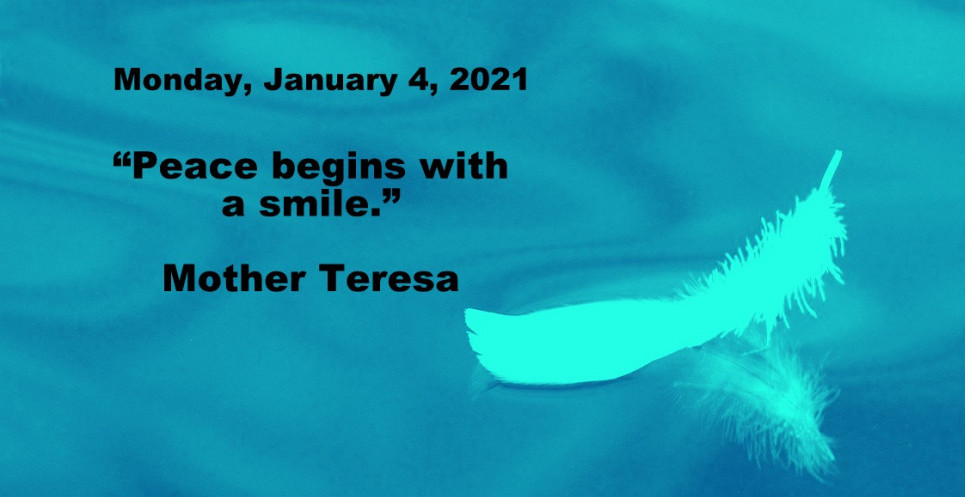 Walt Whitman (May 31, 1819 – March 26, 1892) was an American poet, essayist, and journalist. As a humanist, he was a part of the transition between transcendentalism and realism, incorporating both views in his works. Whitman is among the most influential poets in the American canon, often called the father of free verse. His work was controversial in its time, particularly his poetry collection Leaves of Grass, which was described as obscene for its overt sensuality. 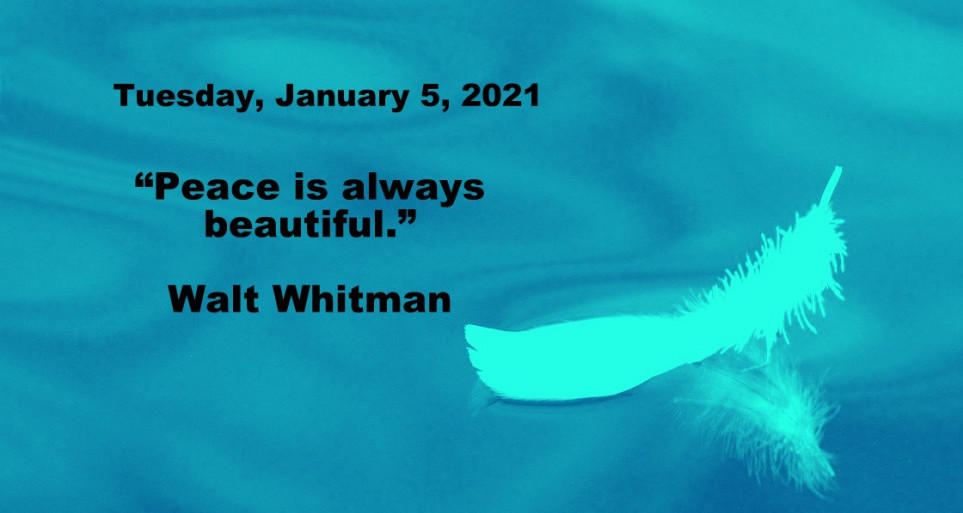 “Peace cannot be kept by force; it can only be achieved by understanding.”
Albert Einstein

Albert Einstein (14 March 1879 – 18 April 1955) was a German-born theoretical physicist who developed the theory of relativity, one of the two pillars of modern physics (alongside quantum mechanics). He received the 1921 Nobel Prize in Physics “for his services to theoretical physics, and especially for his discovery of the law of the photoelectric effect”, a pivotal step in the development of quantum theory. 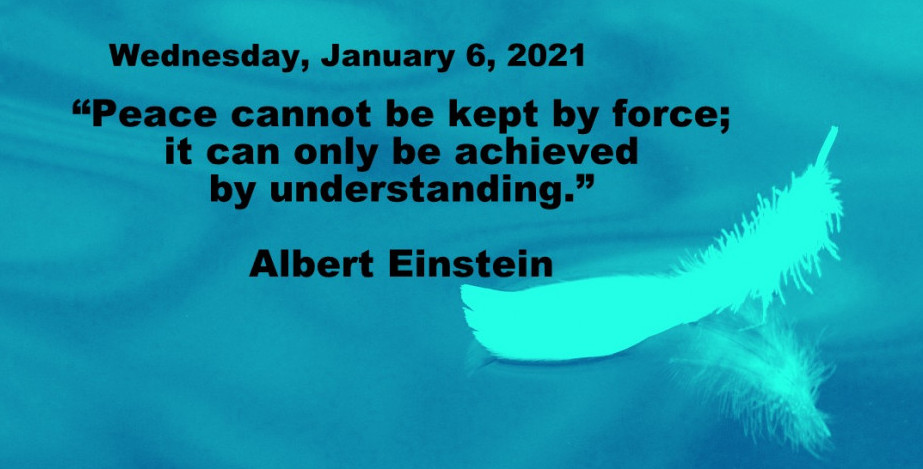 Thursday, January 7, 2021
“It is not enough to win a war; it is more important to organize the peace.”
Aristotle

Aristotle (384–322 BC) was a Greek philosopher and polymath during the Classical period in Ancient Greece. Taught by Plato, he was the founder of the Lyceum, the Peripatetic school of philosophy, and the Aristotelian tradition. His writings cover many subjects including physics, biology, zoology, metaphysics, logic, ethics, aesthetics, poetry, theatre, music, rhetoric, psychology, linguistics, economics, politics, and government. Aristotle provided a complex synthesis of the various philosophies existing prior to him. It was above all from his teachings that the West inherited its intellectual lexicon, as well as problems and methods of inquiry. As a result, his philosophy has exerted a unique influence on almost every form of knowledge in the West and it continues to be a subject of contemporary philosophical discussion. 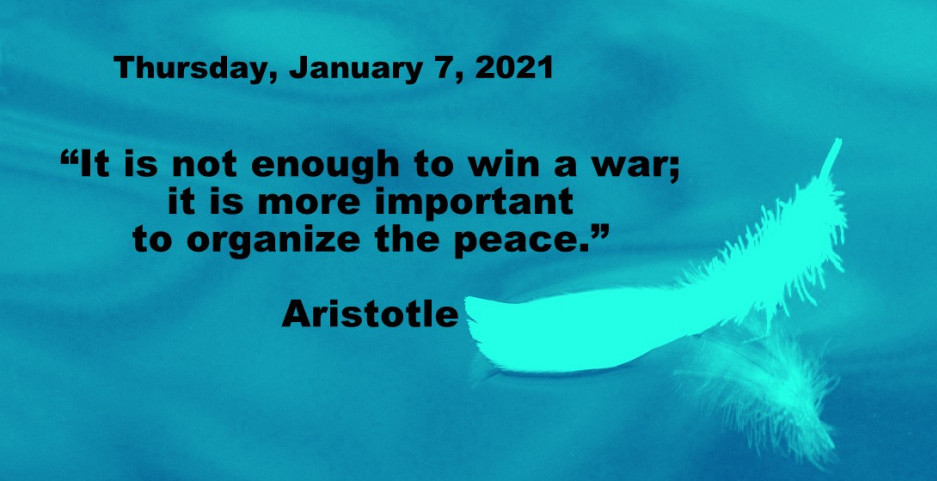 “Better beans and bacon in peace than cakes and ale in fear.”
Aesop

Aesop (620–564 BCE) was a Greek fabulist and storyteller credited with a number of fables now collectively known as Aesop’s Fables. Although his existence remains unclear and no writings by him survive, numerous tales credited to him were gathered across the centuries and in many languages in a storytelling tradition that continues to this day. Many of the tales are characterized by animals and inanimate objects that speak, solve problems and generally have human characteristics. 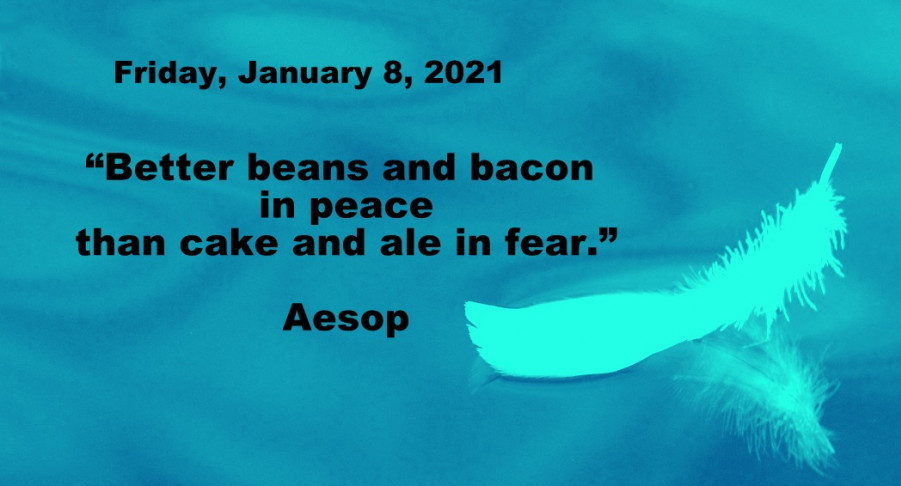 John Fitzgerald Kennedy (May 29, 1917 – November 22, 1963), often referred to by his initials JFK, was an American politician who served as the 35th president of the United States from January 1961 until his assassination in November 1963. Kennedy served at the height of the Cold War, and the majority of his work as president concerning relations with the Soviet Union and Cuba. 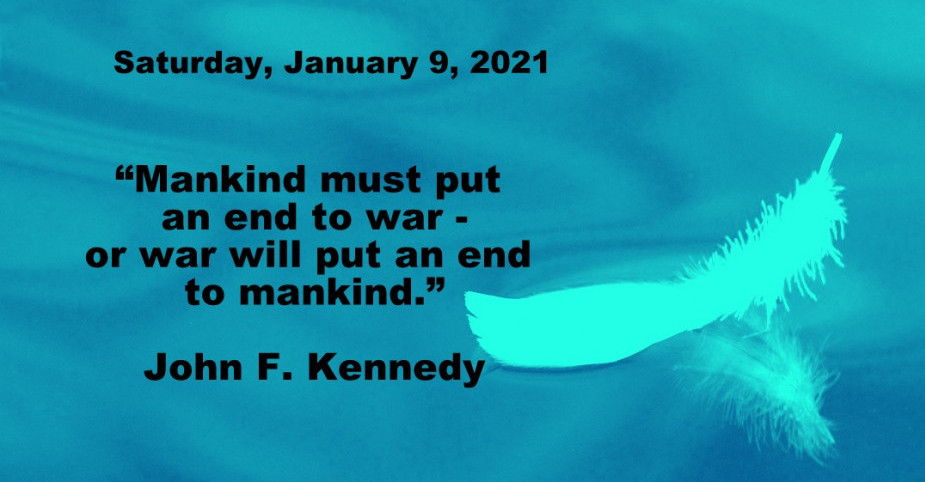 “There is nothing that war has ever achieved that we could not better achieve without it.”
Havelock Ellis

Henry Havelock Ellis (2 February 1859 – 8 July 1939) was an English physician, eugenicist, writer, progressive intellectual and social reformer who studied human sexuality. He co-wrote the first medical textbook in English on homosexuality in 1897, and also published works on a variety of sexual practices and inclinations, as well as on transgender psychology. 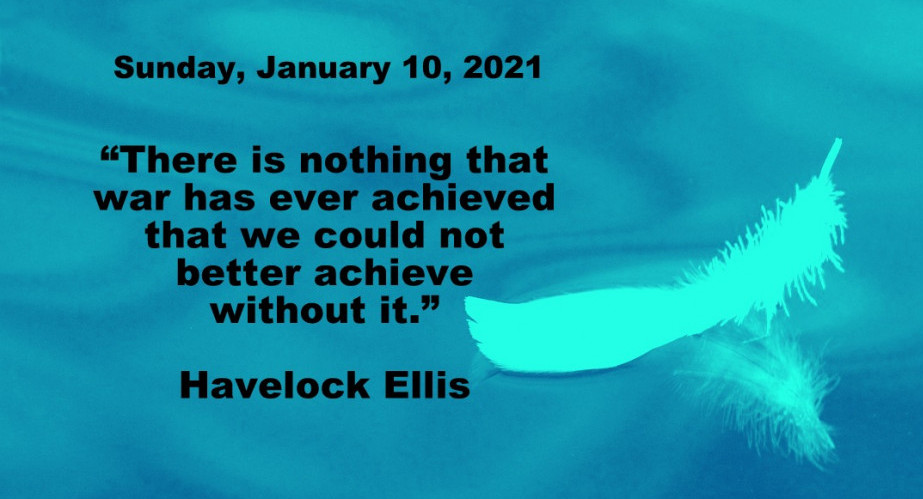 “The day the power of love overrules the love of power, the world will know peace.”
Mahatma Gandhi

“An eye for an eye will only make the whole world blind.”
Mahatma Gandhi

“There is no ‘way to peace,’ there is only ‘peace.”
Mahatma Gandhi

“World peace must develop from inner peace. Peace is not just mere absence of violence. Peace is, I think, the manifestation of human compassion.”
Dalai Lama

“Peace does not mean an absence of conflicts; differences will always be there. Peace means solving these differences through peaceful means; through dialogue, education, knowledge; and through humane ways.”
Dalai Lama

“Better than a thousand hollow words is one word that brings peace.”
Buddha

“Fights between individuals, as well as governments and nations, invariably result from misunderstandings in the broadest interpretation of this term. Misunderstandings are always caused by the inability of appreciating one another’s point of view. This again is due to the ignorance of those concerned, not so much in their own, as in their mutual fields. The peril of a clash is aggravated by a more or less predominant sense of combativeness, posed by every human being. To resist this inherent fighting tendency the best way is to dispel ignorance of the doings of others by a systematic spread of general knowledge. With this object in view, it is most important to aid the exchange of thought and intercourse.”
Nikola Tesla

I prepare a video with new positive thoughts for the coming week every Sunday, with proverbs, or quotes from famous writers, poets, philosophers, celebrities, and photos from different authors, and post it on YouTube. You can watch this week video on this link:

You can watch other weekly videos on this link:

Thank you for reading my post Weekly Positive Quotes – January 4, 20201 – January 10, 2021. Do you have a favorite quote on the topic or which one touched you the most in the collection of quotes for this week? I will be happy if you share your thoughts with me and write a comment. Your feedback means a lot to me.

I wish you a nice peaceful week,