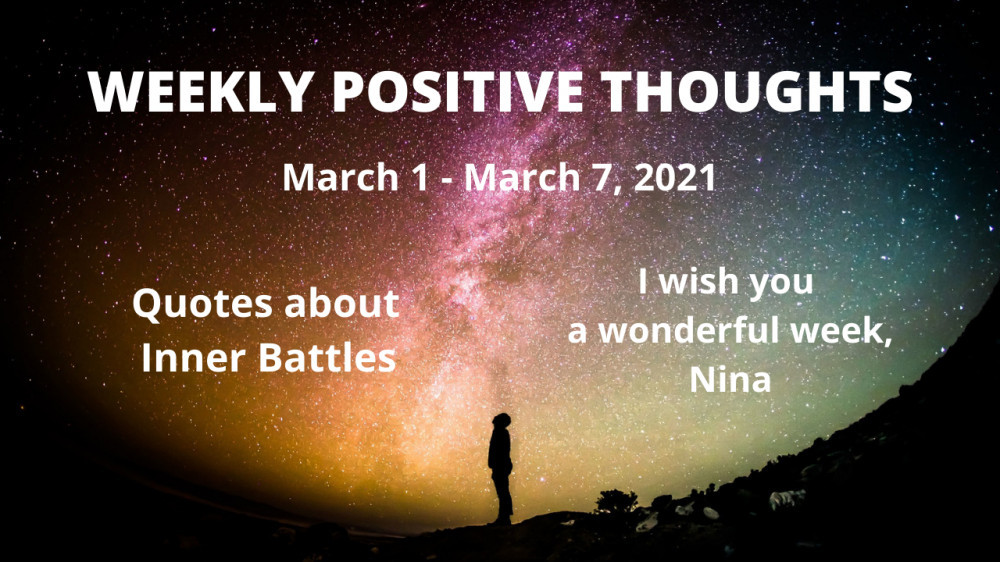 These positive quotes are for the week of March 1 – March 7, 2021, and are famous quotes about battles.

Every Sunday for the coming week, I prepare a video with new positive daily thoughts, with proverbs or quotes from famous writers, poets, philosophers, celebrities, and photographs by various authors and post it to YouTube and as an article on the website to brighten up your moment, day and the whole week.

Monday, March 1, 2021
“Everyone you meet is fighting a battle you know nothing about. Be kind. Always.”
Robin Williams
Robin McLaurin Williams (July 21, 1951 – August 11, 2014) was an American actor and comedian. Known for his improvisational skills and a wide variety of voices, he is often regarded as one of the best comedians of all time. Williams began performing stand-up comedy in San Francisco and Los Angeles during the mid-1970s. 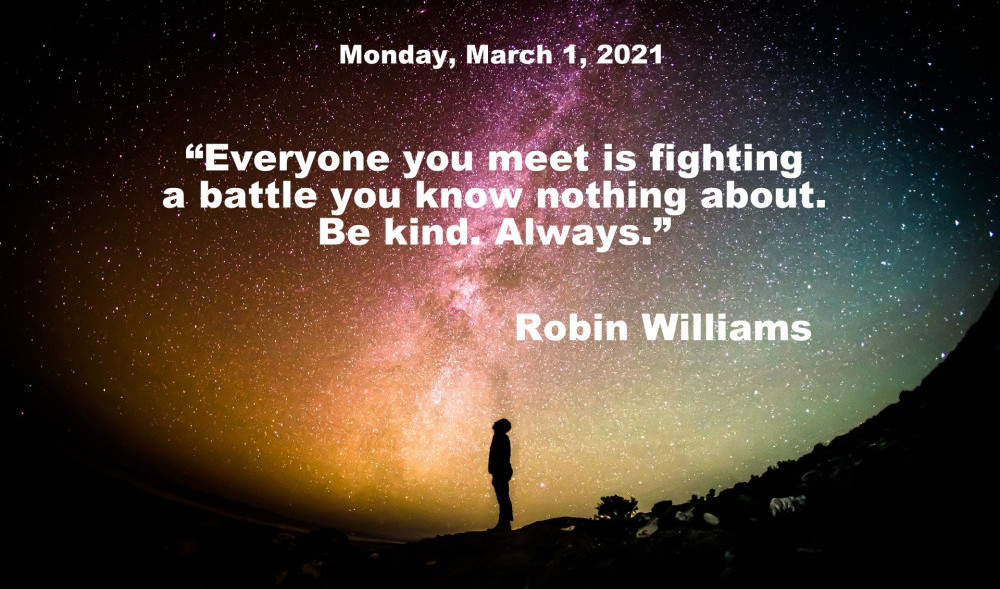 Tuesday, March 2, 2021
“Choose your battles – small enough to win but big enough to matter.”
Carlos Wallace
Born in East, Texas, Professor Carlos Wallace is a 5th generation railroader and Navy veteran. A member of the American Legion, he is also a graduate of the National Labor College and Union Pacific’s elite Brakeman/Conductor school. The International Organizer helped run several political campaigns including that of Democratic Presidential candidate Barack Obama. He is the author of the bestselling book on Amazon bestselling book “Life Is Not Complicated, You Are: Turning Your Biggest Disappointments Into Your Greatest Blessings”. 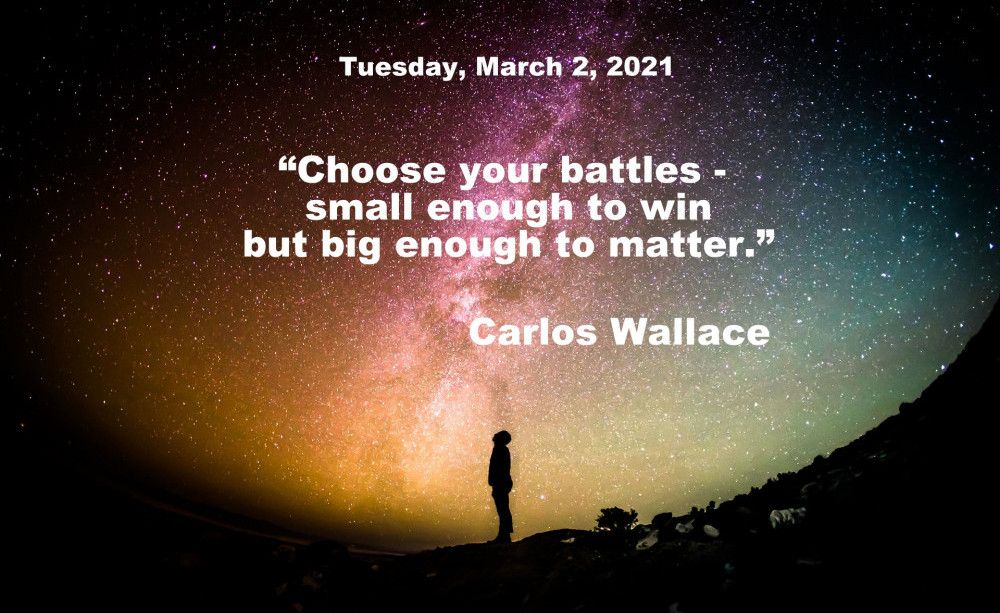 Wednesday, March 3, 2021
“Have you heard that it was good to gain the day? I also say it is good to fall, battles are lost in the same spirit in which they are won.“
Walt Whitman
Walt Whitman ( May 31, 1819 – March 26, 1892) was an American poet, essayist, and journalist. A humanist, he was a part of the transition between transcendentalism and realism, incorporating both views in his works. Whitman is among the most influential poets in the American canon, often called the father of free verse. 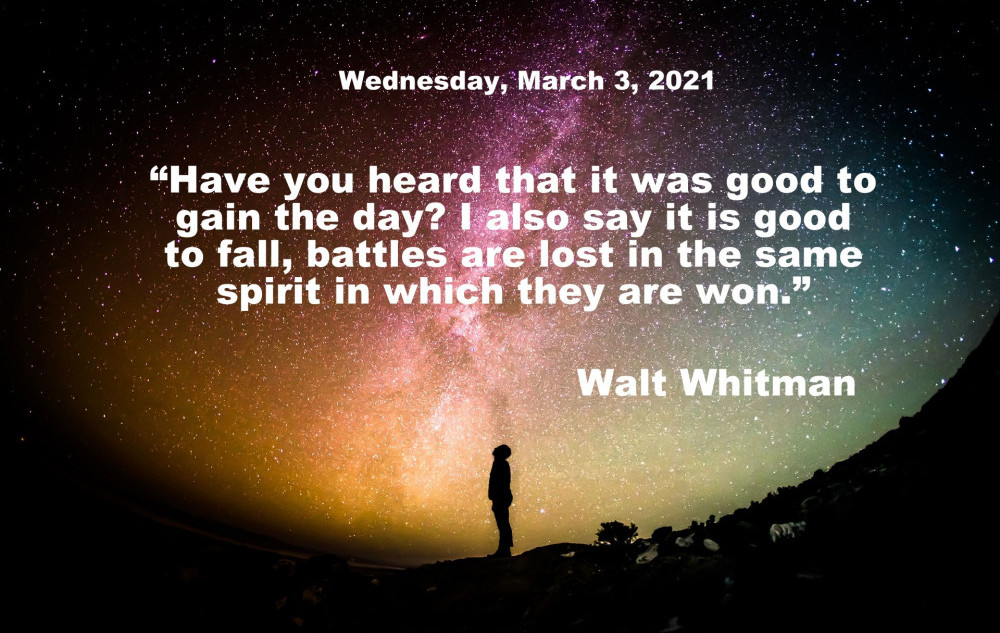 Thursday, March 4, 2021
“Your battles inspired me – not the obvious material battles but those that were fought and won behind your forehead.“
James Joyce
James Augustine Aloysius Joyce (2 February 1882 – 13 January 1941) was an Irish novelist, short story writer, poet, teacher, and literary critic. He contributed to the modernist avant-garde movement and is regarded as one of the most influential and important writers of the 20th century. Joyce is best known for Ulysses (1922). 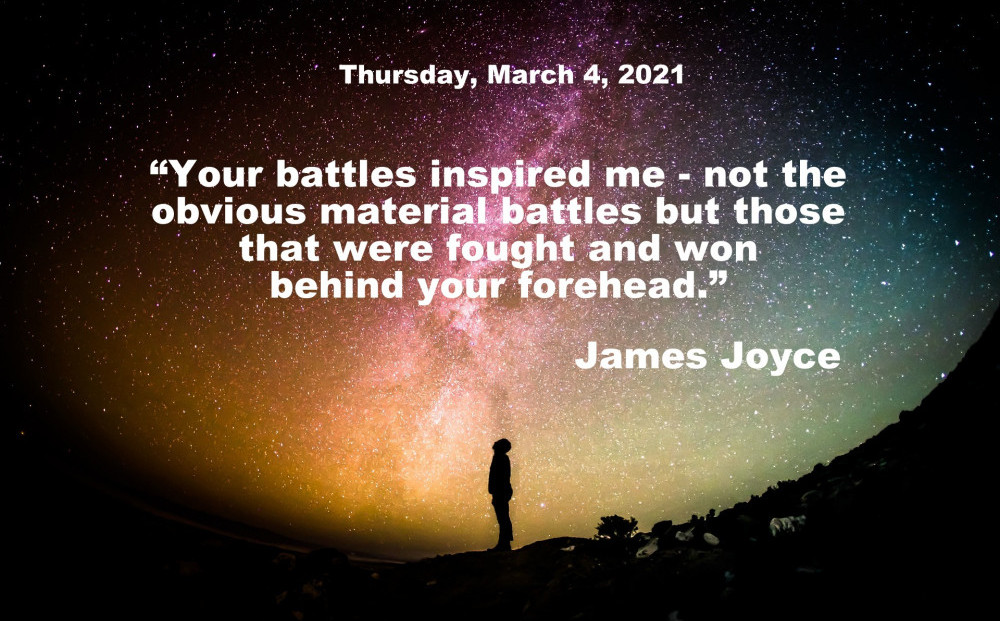 Friday, March 5, 2021
“Some of the greatest battles will be fought within the silent chambers of your own soul.“
Ezra Taft Benson
Ezra Taft Benson (August 4, 1899 – May 30, 1994) was an American farmer, government official, and religious leader who served as the 15th United States Secretary of Agriculture during both presidential terms of Dwight D. Eisenhower and as the 13th president of The Church of Jesus Christ of Latter-day Saints (LDS Church) from 1985 until his death in 1994. 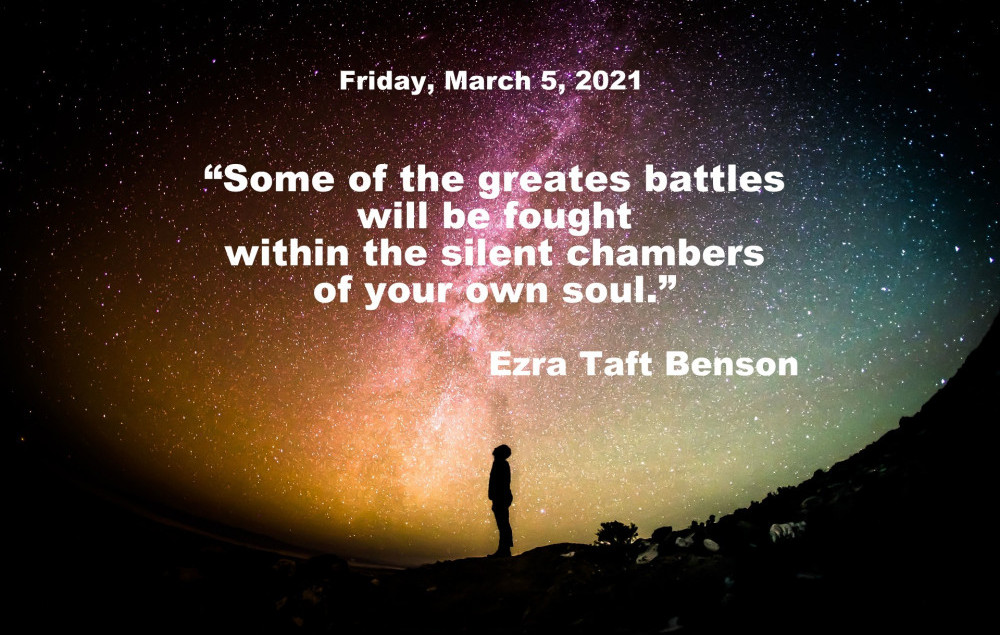 Saturday, March 6, 2021
“Part of the happiness of life consists not in fighting battles, but in avoiding them. A masterly retreat is in itself a victory.“
Norman Vincent Peale
Norman Vincent Peale (May 31, 1898 – December 24, 1993) was an American minister and author who is best known for his work in popularizing the concept of positive thinking, especially through his best-selling book The Power of Positive Thinking. He served as the pastor of Marble Collegiate Church, New York, from 1932 until 1984, leading a Reformed Church in America congregation. 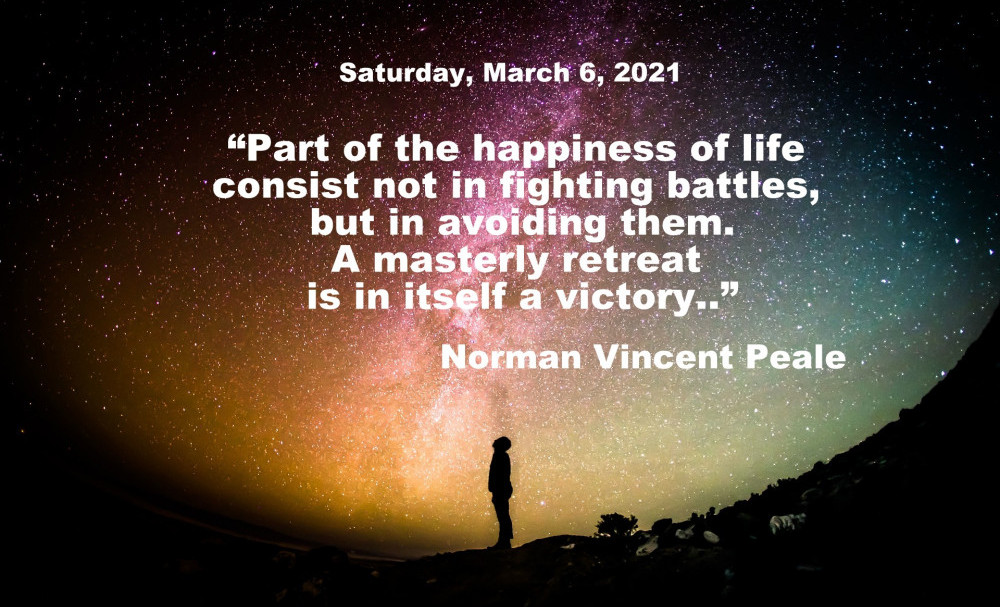 Sunday, March 7, 2021
“It is better to conquer yourself than to win a thousand battles. Then the victory is yours. It cannot be taken from you, not by angels or by demons, heaven or hell.“
Buddha
The Buddha (also known as Siddhattha Gotama or Siddhārtha Gautama or Buddha Shakyamuni) was a philosopher, mendicant, meditator, spiritual teacher, and religious leader who lived in Ancient India. He is revered as the founder of the world religion of Buddhism and worshipped by most Buddhist schools as the Enlightened One who has transcended Karma and escaped the cycle of birth and rebirth. 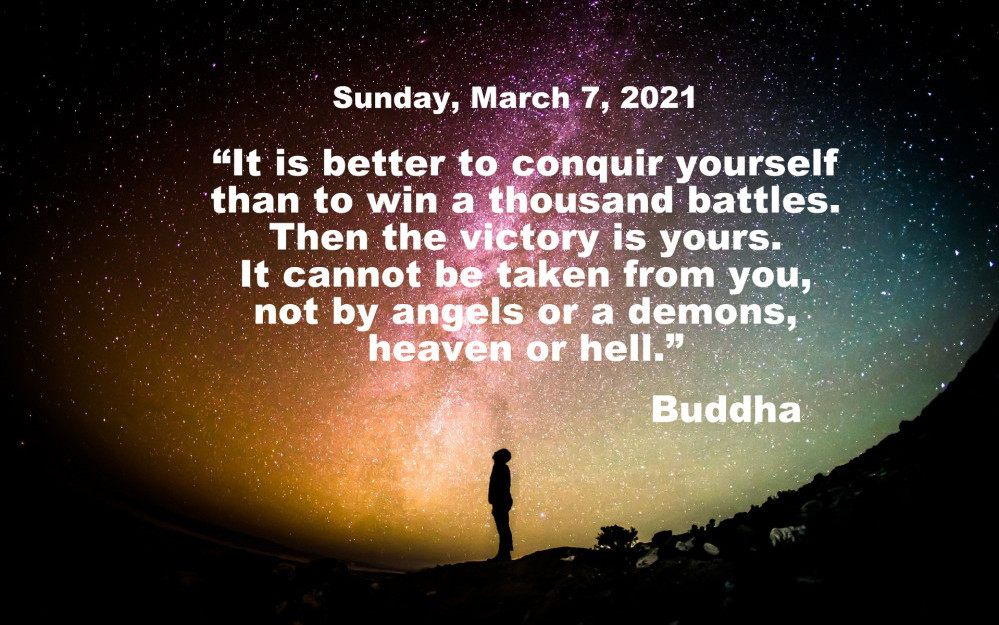 “Choose your battles wisely. After all, life isn’t measured by how many times you stood up to fight. It’s not winning battles that makes you happy, but it’s how many times you turned away and chose to look in a better direction. Life is too short to spend it on warring. Fight only the most, most, most important ones, let the rest go.”
C. JoyBell C.

“I’ve come to realize that life is neither a battle nor a game to be won, it is a game nonetheless, but to be played… enjoyed. There are neither winners nor losers… just players–and what’s great is that you can choose who to play with”
Val Uchendu

“The battles that count aren’t the ones for gold medals. The struggles within yourself – the invisible, inevitable battles inside all of us – that’s where it’s at.”
Jesse Owens

“No one is perfect in this world, and we all have our battles, but it’s the way we get back on our feet and turn it around that really counts.”
Tiffany Thornton

“Wise people choose battles carefully, the way a rat nibbles around a trap. What doesn’t kill you doesn’t always make you stronger. Sometimes, they leave you maimed, scarred, and lackluster.”
Tolu’ Akinyemi

“Not everything that comes our way needs to be overpowered or won. At times we need to ignore many things and that’s what we call FOCUS. Choose your battles, wisely. Knowing when to play and when to sit on the sidelines…when to lead and when to follow…is called WISDOM – a key element for staying focused to reach your destination…your goal. We cannot stop noises around us, but we can close our ears to the noises.”
Sanjeev Himachali

“It is the battles you choose to fight and win that determines how much you can accomplish and how far you can go in this life.”
Victor Kwegyi

“So many people get involved with carrying grudges and having these moral battles with people, where they cast themselves as the righteous and the other guy is the dirtbag. They waste tons of energy on it, create all kinds of darkness around themselves and the other person. It gets you nothing.”
Stephen J. Cannell

“Victory in physical battles requires strength, muscles, and skill; but the fight is never tougher and victory is never sweeter than in the battles over self.”
John Bytheway

“Some people are fighting much, much more important battles and much bigger battles, and if we get the chance to put a smile on their face for ten seconds, it’s so worth it.”
Dolph Ziggler

You can watch this week video on this link:
Weekly Positive Thoughts (March 1 – March 7, 2021)

Thank you for reading my post Weekly Positive Quotes – March 1 – March 7, 2021, with famous quotes about battles.