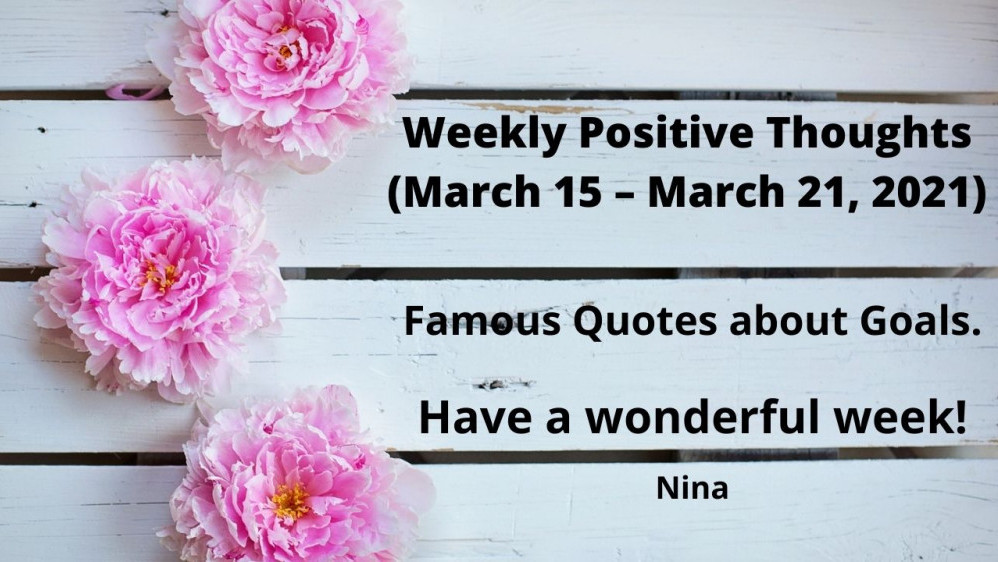 Every Sunday for the coming week, I prepare a video with new positive daily thoughts, with proverbs or quotes from famous writers, poets, philosophers, celebrities, and photographs by various authors and post it to YouTube and as an article on the website to brighten up your moment, day and whole week.

Monday, March 15, 2021
“If you want to live a happy life, tie it to a goal, not to people or things.”
Albert Einstein
Albert Einstein (14 March 1879 – 18 April 1955) was a German-born theoretical physicist, widely acknowledged to be one of the greatest physicists of all time. Einstein is known widely for developing the theory of relativity, but he also made important contributions to the development of the theory of quantum mechanics. Relativity and quantum mechanics are together the two pillars of modern physics. 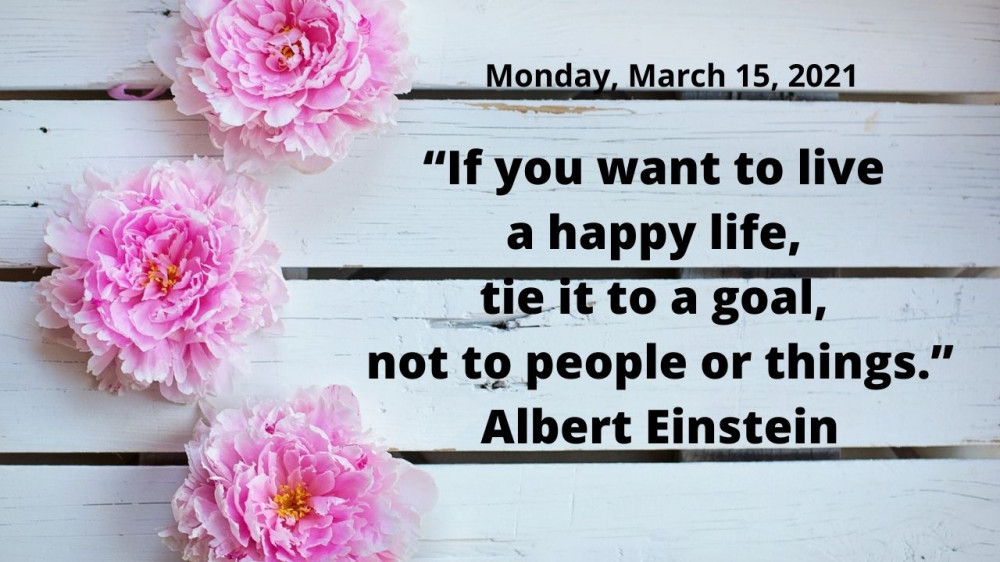 Tuesday, March 16, 2021
“Reach high, for stars lie hidden in you. Dream deep, for every dream precedes the goal.”
Rabindranath Tagore
Rabindranath Tagore FRAS (7 May 1861 – 7 August 1941) was a Bengali poet, writer, composer, philosopher, social reformer, and painter. He reshaped Bengali literature and music, as well as Indian art with Contextual Modernism in the late 19th and early 20th centuries. 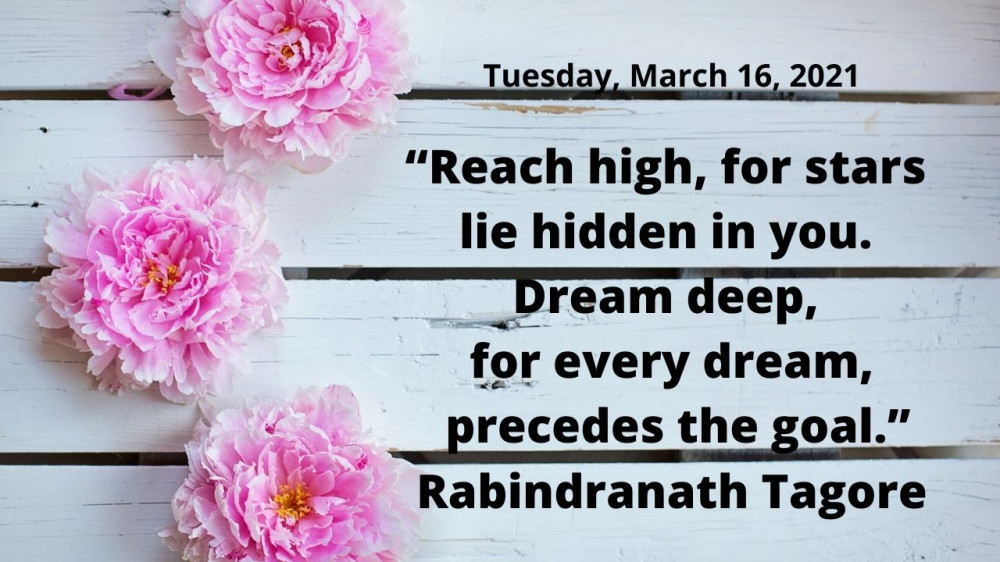 Wednesday, March 17, 2021
“If you’re bored with life, if you don’t get up every morning with a burning desire to do things, you don’t have enough goals.”
Lou Holtz
Louis Leo Holtz (born January 6, 1937) is a former American football player, coach, and analyst. Holtz is the only college football coach to lead six different programs to bowl games and the only coach to guide four different programs to the final top 20 rankings. 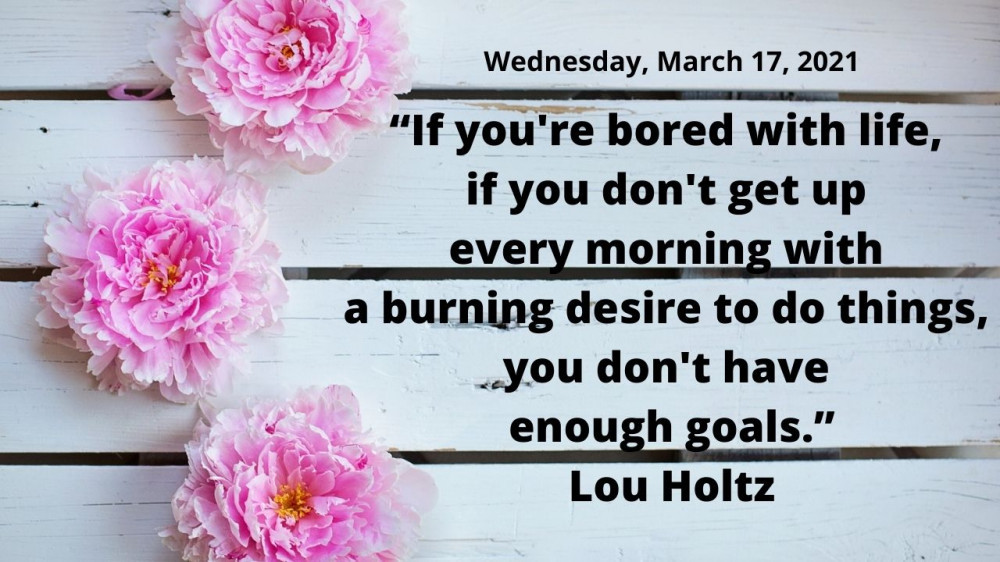 Thursday, March 18, 2021
“You measure the size of the accomplishment by the obstacles you have to overcome to reach your goals.”
Booker T. Washington
Booker Taliaferro Washington (April 5, 1856 – November 14, 1915) was an American educator, author, orator, and adviser to several presidents of the United States. Between 1890 and 1915, Washington was the dominant leader in the African American community and of the contemporary black elite. Washington was a key proponent of African-American businesses and one of the founders of the National Negro Business League. 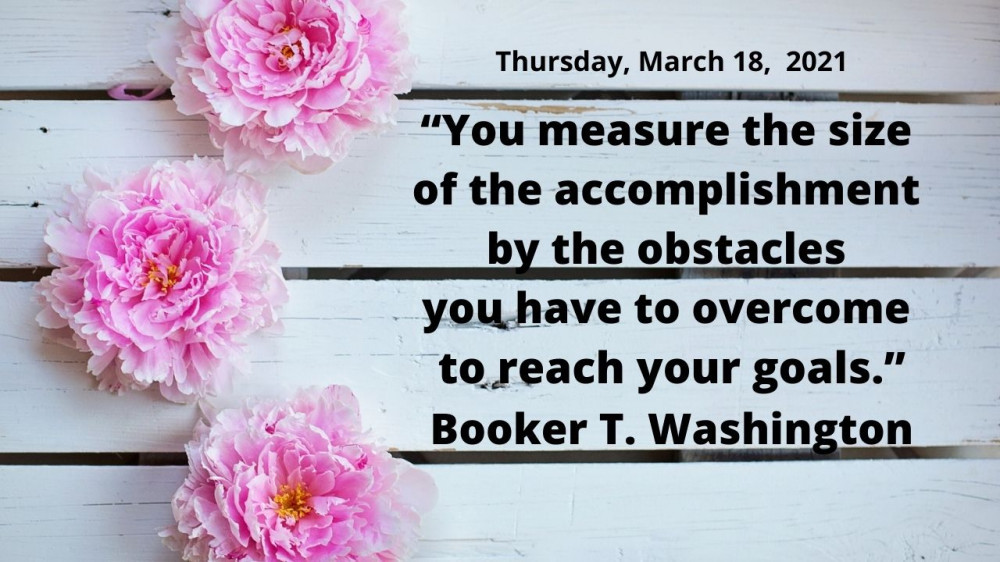 Friday, March 19, 2021
“Know what you want to do, hold the thought firmly, and do every day what should be done, and every sunset will see you that much nearer the goal.”
Elbert Hubbard
Elbert Green Hubbard (June 19, 1856 – May 7, 1915) was an American writer, publisher, artist, and philosopher. Among Hubbard’s many publications were the fourteen-volume work Little Journeys to the Homes of the Great and the short publication A Message to Garcia. 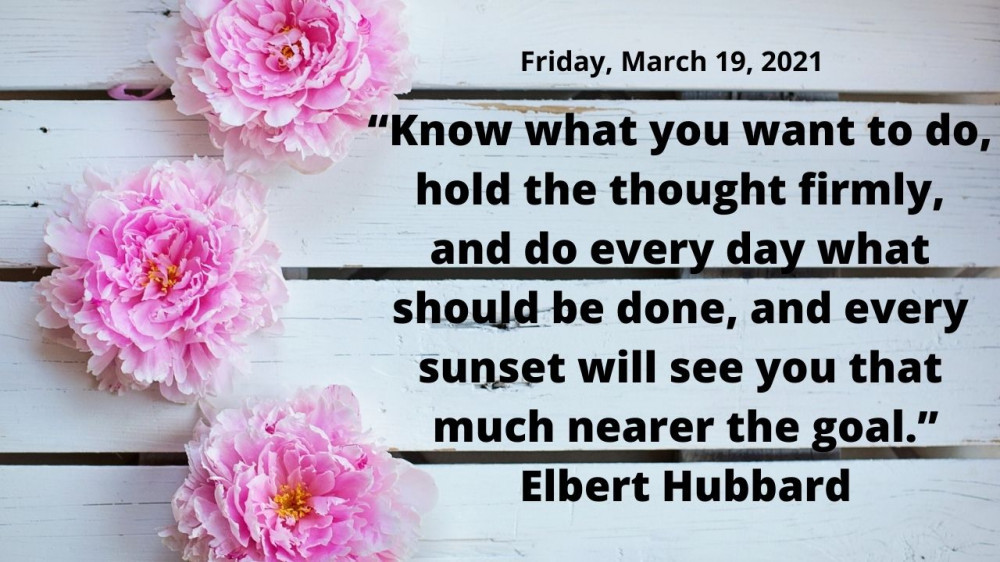 Saturday, March 20, 2021
“It is good to have an end to journey toward; but it is the journey that matters, in the end.”
Ursula K. Le Guin
Ursula Kroeber Le Guin (October 21, 1929 – January 22, 2018) was an American author best known for her works of speculative fiction, including science-fiction works set in her Hainish universe and the Earthsea fantasy series. She was first published in 1959, and her literary career spanned nearly sixty years, yielding more than twenty novels and over a hundred short stories, in addition to poetry, literary criticism, translations, and children’s books. 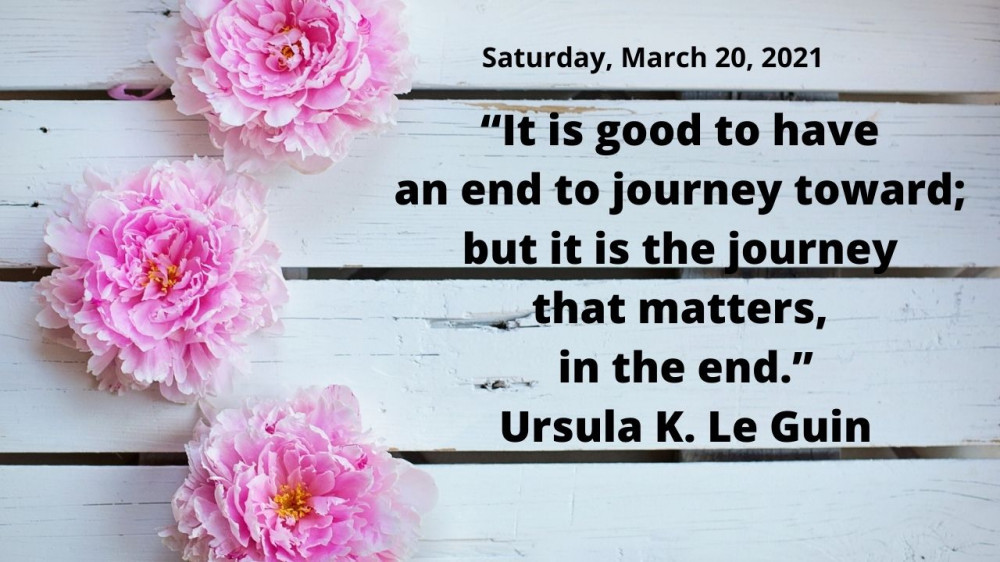 Sunday, March 21, 2021
“A clear purpose will unite you as you move forward, values will guide your behavior, and goals will focus your energy.”
Kenneth H. Blanchard
Kenneth Hartley Blanchard (born May 6, 1939) is an American author, business consultant, and motivational speaker. His extensive writing career includes over 60 published books, most of which are co-authored books. His most successful book, The One Minute Manager, has sold over 15 million copies and been translated into many languages. 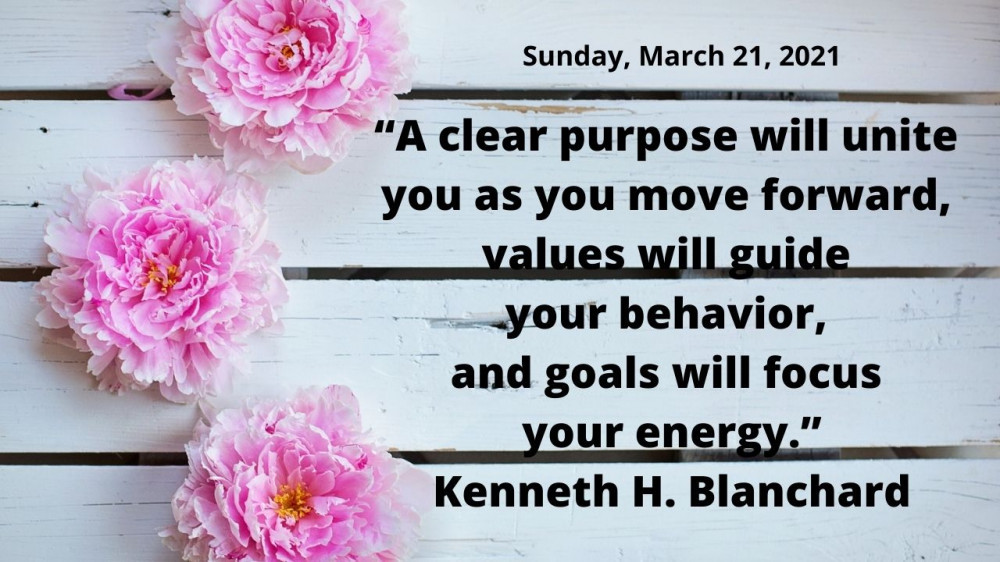 “Whenever you want to achieve something, keep your eyes open, concentrate and make sure you know exactly what it is you want. No one can hit their target with their eyes closed.”
Paulo Coelho

“If you have a dream, don’t just sit there. Gather courage to believe that you can succeed and leave no stone unturned to make it a reality.”
Dr Roopleen

“A goal is not always meant to be reached, it often serves simply as something to aim at.”
Bruce Lee

“If a man knows not to which port he sails, no wind is favorable.”
Seneca the Younger

“It is a paradoxical but profoundly true and important principle of life that the most likely way to reach a goal is to be aiming not at that goal itself but at some more ambitious goal beyond it.”
Arnold Joseph Toynbee

“Not all dreamers are winners, but all winners are dreamers. Your dream is the key to your future. The Bible says that “without a vision (dream), a people perish.” You need a dream if you’re going to succeed in anything you do.”
Mark Gorman

“Patience is not passive waiting. Patience is active acceptance of the process required to attain your goals and dreams.”
Ray A. Davis

“Goals want to be realized as soon as they’re created.”
Zoltan Andrejkovics

Thank you for reading my post Weekly Positive Quotes – March 15 – March 21, 2021, with famous quotes about goals.