These positive quotes are for the week of March 8 – March 14, 2021, and are famous quotes about women. March 8 is International Women’s Day, so this week’s quotes are dedicated to women by women.

Every Sunday for the coming week, I prepare a video with new positive daily thoughts, with proverbs or quotes from famous writers, poets, philosophers, celebrities, and photographs by various authors and post it to YouTube and as an article on the website to brighten up your moment, day and whole week. 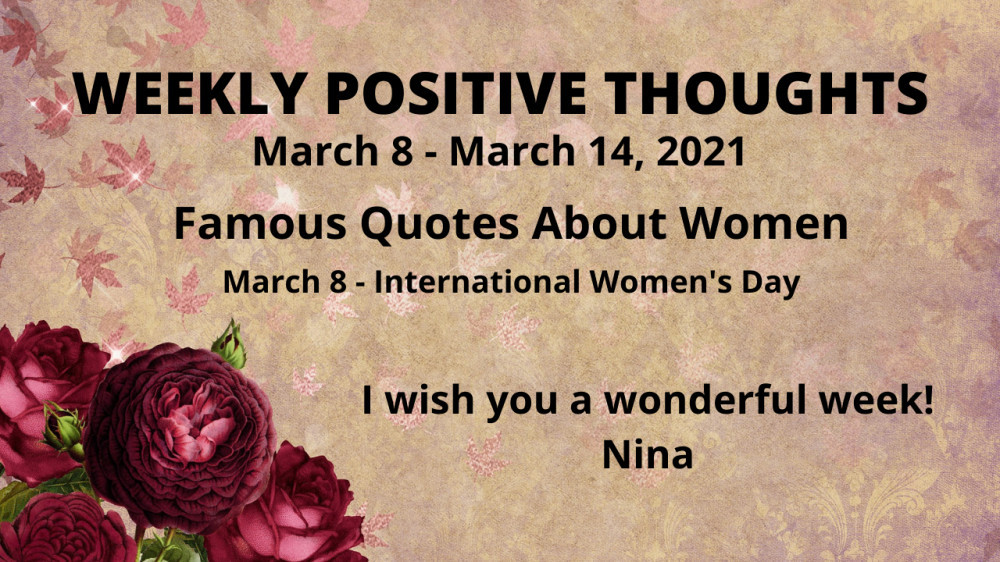 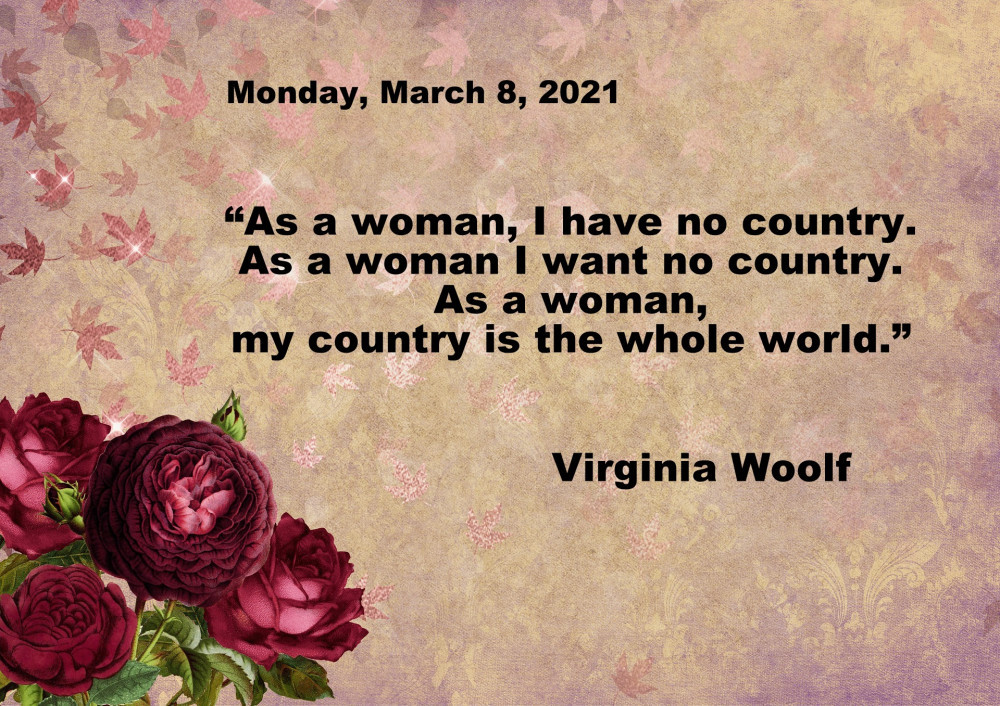 Tuesday, March 9, 2021
“I am not free while any woman is not free, even if her shackles are very different from mine.”
Audre Lorde
Audre Lorde ( February 18, 1934 – November 17, 1992) was an American writer, feminist, womanist, librarian, and civil rights, activist. She was a self-described “Black, lesbian, mother, warrior, poet,” who dedicated both her life and her creative talent to confronting and addressing injustices of racism, sexism, classism, capitalism, heterosexism, and homophobia. 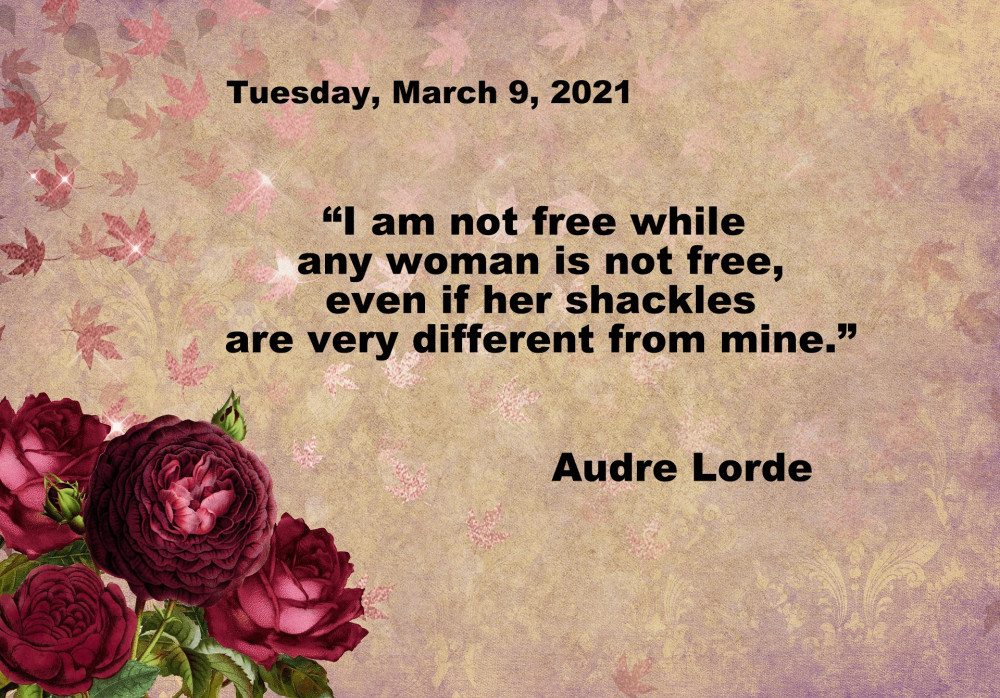 Wednesday, March 10, 2021
“What I condemn are our system of values and the men who don’t acknowledge how great, difficult, but ultimately beautiful women’s share in society is.”
Anne Frank
Annelies Marie “Anne” Frank (12 June 1929 – February or March 1945) was a German-Dutch diarist of Jewish heritage. One of the most discussed Jewish victims of the Holocaust, she gained fame posthumously with the publication of The Diary of a Young Girl in which she documents her life in hiding from 1942 to 1944, during the German occupation of the Netherlands in World War II. It is one of the world’s best-known books and has been the basis for several plays and films. 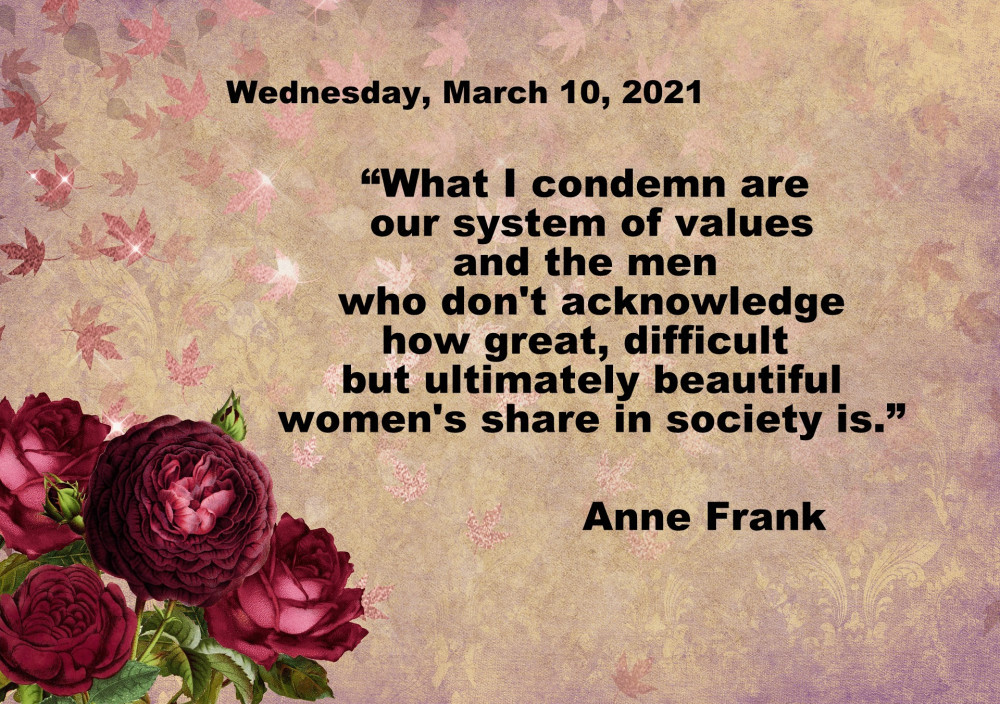 Thursday, March 11, 2021
“I do not wish them [women] to have power over men; but over themselves.”
Mary Wollstonecraft
Mary Wollstonecraft ( 27 April 1759 – 10 September 1797) was an English writer, philosopher, and advocate of women’s rights. Until the late 20th century, Wollstonecraft’s life, which encompassed several unconventional personal relationships at the time, received more attention than her writing. Today Wollstonecraft is regarded as one of the founding feminist philosophers, and feminists often cite both her life and her works as important influences. 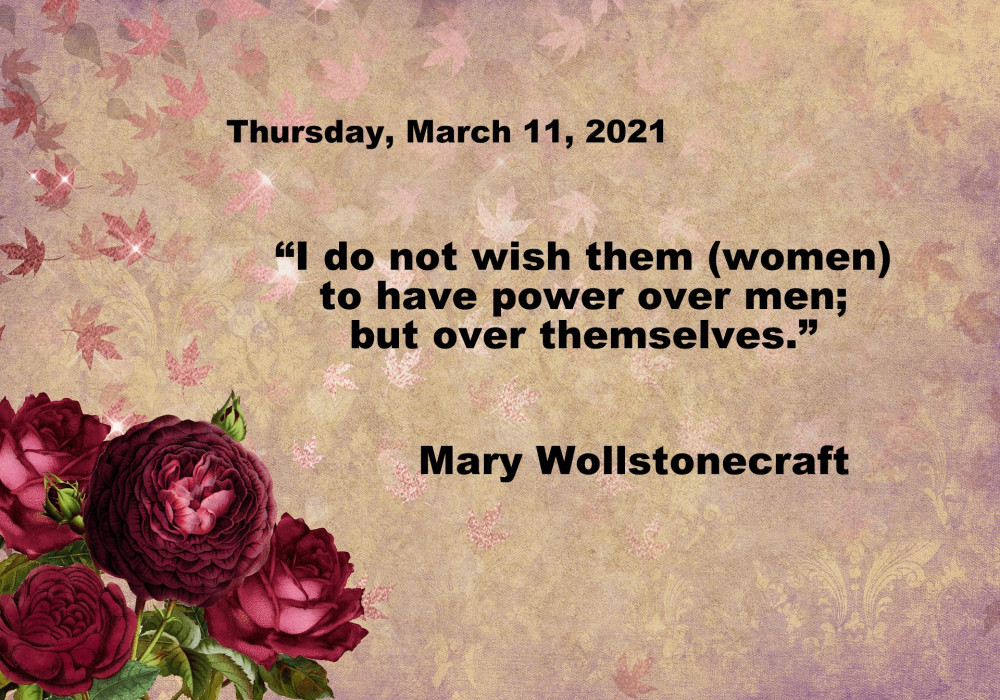 Friday, March 12, 2021
“We still think of a powerful man as a born leader and a powerful woman as an anomaly.”
Margaret Atwood
Margaret Eleanor Atwood (born November 18, 1939) is a Canadian poet, novelist, literary critic, essayist, teacher, environmental activist, and inventor. Since 1961, she has published 18 books of poetry, 18 novels, 11 books of non-fiction, nine collections of short fiction, eight children’s books, and two graphic novels, as well as a number of small press editions of both poetry and fiction. Atwood has won numerous awards and honors for her writing. 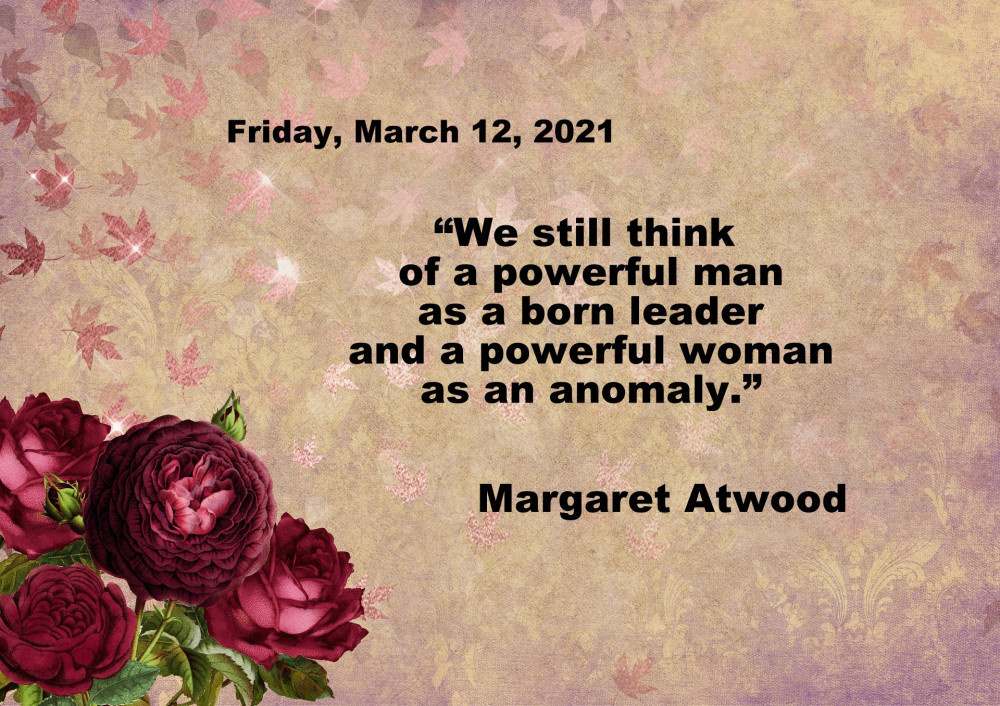 Saturday, March 13, 2021
“In politics, If you want anything said, ask a man. If you want anything done, ask a woman.”
Margaret Thatcher
Margaret Hilda Thatcher, Baroness Thatcher (13 October 1925 – 8 April 2013) was a British politician and stateswoman who served as Prime Minister of the United Kingdom from 1979 to 1990 and Leader of the Conservative Party from 1975 to 1990. She was the longest-serving British prime minister of the 20th century and the first woman to hold that office. A Soviet journalist dubbed her the “Iron Lady”, a nickname that became associated with her uncompromising politics and leadership style. 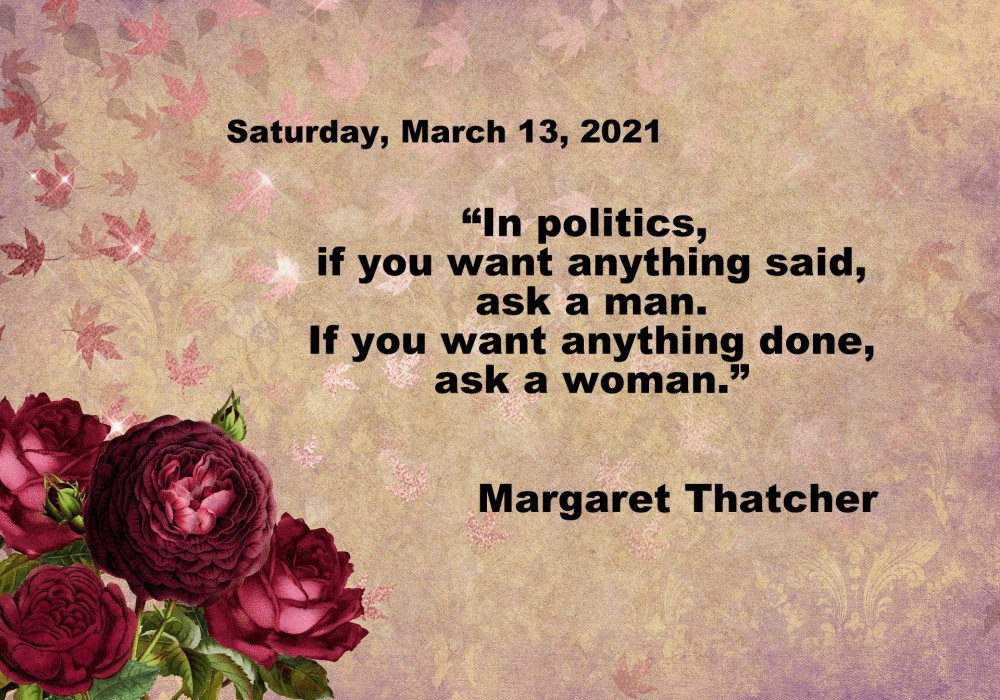 Sunday, March 14, 2021
“The thing women have yet to learn is nobody gives you power. You just take it. ”
Roseanne Barr
Roseanne Cherrie Barr (born November 3, 1952) is an American actress, comedian, writer, producer, and presidential candidate. Barr began her career in stand-up comedy before gaining acclaim in the television sitcom Roseanne. She has also been active and outspoken on political issues. 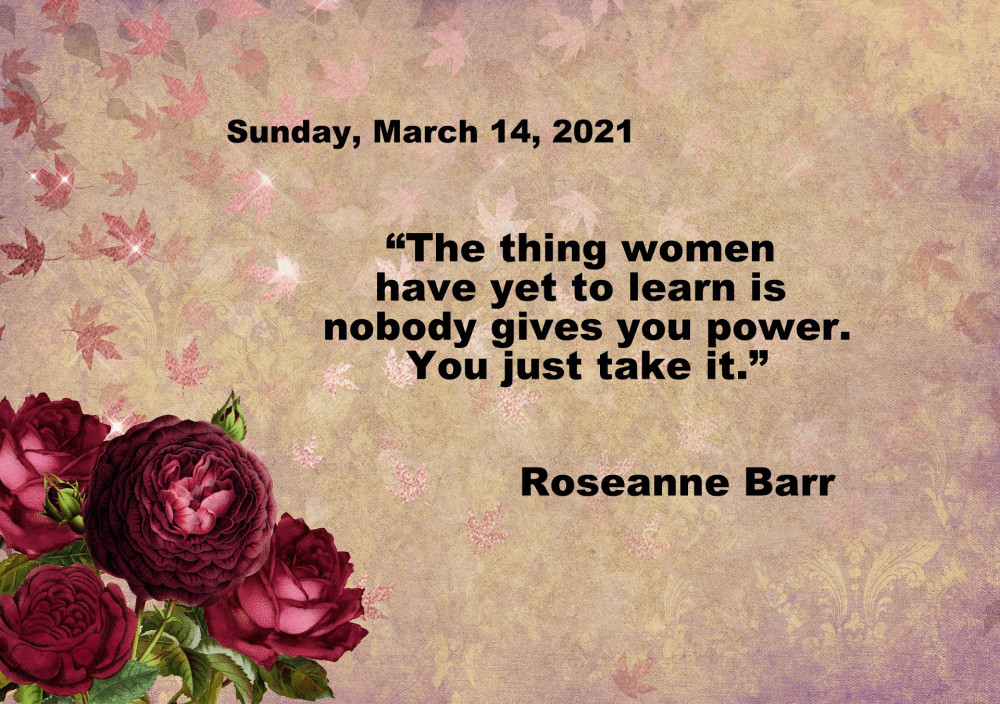 To the Women of India (Young India, Oct. 4, 1930)
“To call woman the weaker sex is a libel; it is man’s injustice to woman. If by strength is meant brute strength, then, indeed, is woman less brute than man. If by strength is meant moral power, then woman is immeasurably man’s superior. Has she not greater intuition, is she not more self-sacrificing, has she not greater powers of endurance, has she not greater courage? Without her, man could not be. If nonviolence is the law of our being, the future is with woman. Who can make a more effective appeal to the heart than woman?”
Mahatma Gandhi

“I want to do it because I want to do it. Women must try to do things as men have tried. When they fail, their failure must be but a challenge to others.”
Amelia Earhart

“A state that does not educate and train women is like a man who only trains his right arm.”
Jostein Gaarder

“Women are never so strong as after their defeat.”
Alexandre Dumas

“A woman’s guess is much more accurate than a man’s certainty.”
Rudyard Kipling

“Some women are meant to change the world, while others are meant to hold it together. And then there are those of us who simply don’t want to be in it, because we know no matter how much we struggle, we can’t comfortably fit.”
Jodi Picoult

“There are two powers in the world; one is the sword and the other is the pen. There is a great competition and rivalry between the two. There is a third power stronger than both, that of the women.”
Muhammad Ali Jinnah

“We are women, and my plea is Let me be a woman, holy through and through, asking for nothing but what God wants to give me, receiving with both hands and with all my heart whatever that is.”
Elisabeth Elliot

“We cannot change what we are not aware of, and once we are aware, we cannot help but change.”
Sheryl Sandberg

“I think women are foolish to pretend they are equal to men, they are far superior and always have been.”
William Golding

“Any woman who chooses to behave like a full human being should be warned that the armies of the status quo will treat her as something of a dirty joke . . . She will need her sisterhood.”
Gloria Steinem

“Women are going to form a chain, a greater sisterhood than the world has ever known.”
Nellie McClung

“There is a special place in hell for women who don’t help other women.”
Madeleine Albright

Thank you for reading my post Weekly Positive Quotes – March 8 – March 14, 2021, with famous quotes about women. Since I myself have been actively involved in gender equality projects, I felt it was most appropriate to dedicate this week to women.

Have a wonderful week,